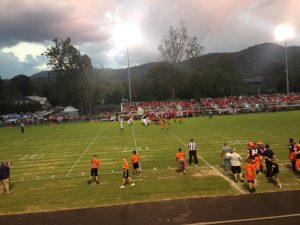 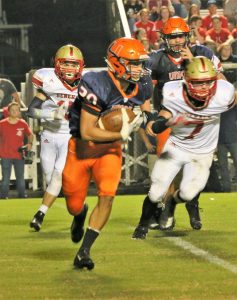 It was a sluggish start for the Union Bears in their first home game after a three game road trip. The visiting Lee High Generals dominated the time of possession and had double the offensive snaps in the opening stanza. But senior running back Avery Jenkins changed all of that in an instant. The track star scored three second quarter touchdowns that gave the Bears a big lead going into the break and allowed Union to cruise to a 42-7 conference victory.

The opening score for Jenkins came on a 32-yard run in the second quarter that saw him reverse field and outrun the defenders to give the Bears a 7-0 lead. His second touchdown run, a 59-yard jaunt, showcased his elite speed as he turned on the afterburner to scamper by the Lee defense.

It was the third score of the night for Jenkins that put the nail in the proverbial coffin. After the Union defense forced a turnover on downs with eight seconds remaining in the half, coach Travis Turner elected to play it safe and nurse a two touchdown lead. The call was an outside sweep to run out the half for Jenkins to get loose for a big play. He did just that. He hit his hope at the line at top speed and never looked back, racing 71 yards for the score.

The second half began just as the first ended, with a Union drive eating up yardage on the ground and ending in a four yard run by Aaron Stidham to push the lead to 28-0. After forcing a punt, the Bears continued to showcase the ground assault. Junior fullback Mason Polier got loose from 32 yards out to add to the lead. Union back up quarterback Andy Jones added the final points for the home squad with a one yard touchdown run on a quarterback sneak. Lee finally got on the board on the ensuing kickoff when Devin Goins found a crease and took the kick 85 yards for a score that made the final margin 42-7.

Despite not touching the ball in the second half, Avery Jenkins finished with 190 yards on only nine carries, an average of 21 yards per carry. Polier also broke the 100-yard rushing mark, adding 105 yards of his own. The Bears finished the game with well over 400 rushing yards as a team.

The win moves Union to 6-1 overall and 3-1 in the Mountain 7. Lee High falls to 2-4 overall and 0-2 in M7 play. Next week, Union hosts Wise Central for homecoming. Lee High will try to score their first conference win next week as they welcome winless Gate City to Ben Hur Stadium.