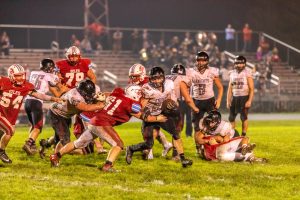 The Spartan faithful were in shock after witnessing Giles (3-4, 1-2) surrender a 28-0 lead against James River (5-1, 1-1). The Knights scored 36 unanswered points and completely shut the single-wing offense down in the second half, leaving Steven C. Ragsdale with a 36-28 victory to spoil homecoming in Pearisburg.

Giles won the toss and elected to defer until the second half, which was unusual as the Spartans always elect to receive opening kickoff.  It paid off as James River went three and out on their first possession. Giles drove down the field and fullback Dominic Collini punched it into the end zone from six yards out. Spartans led 7-0 early in the first quarter.

The Knights failed to pick up any yardage on their second possession, forcing them to punt it back to Giles. On the next play, the Spartans fooled the entire Knight defense, putting the ball in the air. Tailback Chaston Ratcliffe dropped back and connected with his wide open wingback Chase Fleeman for the 50-yard touchdown reception. Giles extended their lead 14-0 midway through the first. 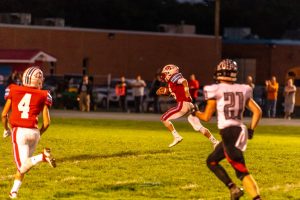 The disastrous start continued for James River when they had to punt on their third possession. Giles defensive end Kip Green blasted through the line and blocked the punt, setting Giles up with their next possession on the one yard line. Ratcliffe marched in for the easy score. The Spartans had all the momentum going into the second quarter with a 21-0 lead. 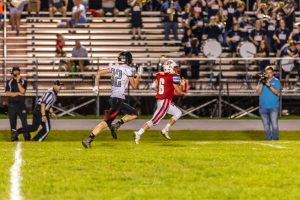 Fleeman added another score in the second, sprinting 50 yards into the end zone on a reverse. Giles lead 28-0 with over 200 yards of total offense. From there, it was all downhill for Giles as the momentum shifted to James River on their next possession. Quarterback Coulter Hodges found a weak spot in the Spartan defense, using his legs and arm to march the Knights down the field. He rushed into the end zone from three yards out, giving James River their first score of the night.

On the Knights next possession, they had to punt the ball away but it bounced off of a Giles player and James River recovered around midfield. The Knights wanted a quick score before half but ran out of time, trailing 28-7.

The come back started in the third quarter. After holding Giles scoreless, James River found the end zone late in the third. Hodges connected with River Clonch from 42 yards out, cutting into the lead 28-14.

Hodges connected with Clonch again early in the fourth from seven yards out. After an encroachment penalty was called on the Spartans, the Knights went for two and converted. James River trailed 28-22. The emotions started for Giles, as they could not get their offense going. After another three and out, the Spartans punted back to James River. Six plays later, Hodges was in the end zone again from three yards out. All the Knights needed was to convert the extra point to take the lead but a Spartan defender sprinted through the line and blocked the kick. 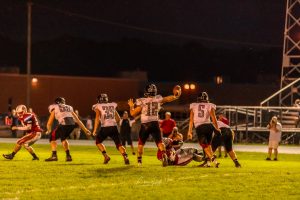 James River got the ball back with under two minutes remaining. After multiple personal foul penalties by the Spartans, the Knights were inside the 30 yard line. Giles held James River to a fourth-and-13. Coach Phillips kept his kicker on the sidelines and put all his faith into his quarterback. It was a risky call but it paid off, as Hodges connected with McAllister in the back corner of the end zone with 23 seconds remaining in the game. McAllister ran into the end zone on the two point conversion, sealing the victory for the Knights.

Hodges finished with 132 yards and the ground and 156 yards through the air along with five total touchdowns for the Knights. James River held Giles to 56 total yards of offense in the second half.