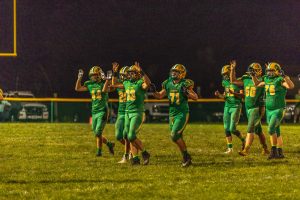 Narrows (4-1) starts defending their 2017 Pioneer District title this week at Covington (3-2). The two teams played twice last season. Narrows won the regular season contest 48-18 and one more defeated the Cougars 21-0 in the second round of the playoffs. Covington seeks revenge, led by one of the top running backs in the Pioneer district.

In last week’s 56-14 victory over Nelson County, Covington had 454 total yards of offense. 304 of those yards came from running back Shaun Smith. Smith averaged 9.8 yards per carry and scored six touchdowns for the Cougars. Through five games, he has rushed for 561 yards on 78 carries, averaging 7.2 yards per carry. The stingy Green Wave defense will put him to the test as they have only allowed 100 yards rushing in one game this season. While Covington has two losses on the season, those losses were in close games against 2A powerhouse Glenvar and James River.

Narrows is coming off a 34-14 win against Holston, who had only lost one game before they met up with the Green Wave. Leading the Wave is quarterback Wyatt Freeman and running back Matthew Morgan. Freeman has thrown for 600 yards this season along with seven touchdowns. While he may not be a dual threat quarterback, he knows when to tuck it and run. In last week’s game, it was all about Morgan who rushed for nearly 200 yards against the Cavaliers. Morgan has carried the ball 48 times for 410 yards, averaging 8.4 yards per carry through five games.

Narrows is currently third in Region 1C, followed by Covington in fourth. If the Green Wave can return home with a victory, they may find themselves in the top two. Losing to the Cougars may shatter their chances at securing the number one seed come post season. Covington leads the series 5-3.