There is not much history between Giles and James River, as the two have played each other five times since 1980 with Giles leading the series 4-1. With the Knights now in the Three Rivers District, they know that beating Giles would be a great accomplishment, especially after falling to the Spartans 54-7 last season.

After only winning three games in 2017, James River won their first four games in the 2018 season. This is the first time since 2001 that the Knights started 4-0. They suffered their first loss of the season last Friday in a defensive battle to Glenvar, who currently sits at the top of Region 2C. While the Knights only points were from a safety, they held Glenvar to just 13 points.

Leading the way for the Knights is the dynamic duo of quarterback Coulter Hodges and receiver River Clonch. The two have been playing together since little league. Hodges can hurt you with his arm and his legs. Through five games, he has completed 37 passes for 574 yards and six touchdowns. He has rushed for 350 yards and three touchdowns. Clonch has 22 receptions for 406 yards and five touchdowns. Clonch and Hodges also return kickoffs and punts for the Knights, where they have done well with setting their offense up with good field position. 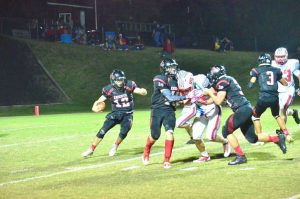 QB Coulter Hodges against Giles in 2017 (photo by Ed McCoy)

Giles must put last weeks 38-0 beating from Radford behind them and focus on this important district contest. The potent single-wing offense failed to gain 100 yards rushing against the Bobcats.

Giles has three running backs that combine for 1,217 yards. Logan Greenway and Chaston Ratcliffe rotate at the tailback position. Ratcliffe, who rushed for 423 yards through six games, started at tailback until he suffered an injury in week three against Graham. After his injury, Greenway stepped in at tailback, rushing for 489 yards in the last three and a half games. Fullback Hunter Williams has 305 yards rushing through six games.

James River currently sits at the fifth spot in Region 2C followed by Giles at number six. While there is still plenty of football to be played, the loser of this game could forget all hopes of finishing in the top four of the region.

This game is scheduled to kickoff at 7 p.m. in Pearisburg at Steven C. Ragsdale Field.