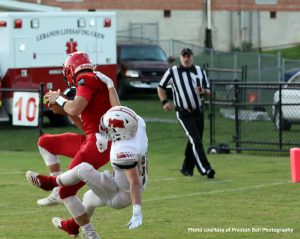 Lebanon got off to a good start as they tried to earn their first win of the season. Jackson Mullins returned the opening kickoff to the Marion 48 yard line giving Lebanon good starting field position. RB Seth Stanley got the Pioneer offense rolling with a nine-yard run. A couple plays later, QB Casey White connected with WR Cole Stoots in the end-zone to put the Pioneers up 6-0 within the first four minutes of the game.

The Hurricanes set up shop on their own 48 yard line after a 27 yard kickoff return. Putting together a solid drive on the strength of their running game, Marion moved the ball inside the Lebanon 10 yard line. The scoring threat ended as Stoots made another big play intercepting a Marion pass to get the ball back for the Pioneers on their own seven yard line.

The Hurricane defense was up to the task and slowed the Lebanon offense this time. White’s pass on 3rd & 10 to Alden Ward fell just short of the first down. The Pioneers opted to go for it on 4th & inches on their own 16 yard line. They failed to convert and turned the ball over on downs.

Taking over on downs, penalties cost the Marion offense as they found themselves pushed back to the Pioneers’ 30 yd line. Under heavy pressure from the Lebanon defense, Marion was held in check and faced 4th & 26 on the Pioneer 33 yard line. Marion QB Tanner Tate found his favorite target up the sideline as WR Devin Hamm hauled in the TD reception to tie the game at 6-6. The two-point conversion attempt failed. 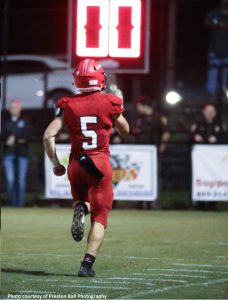 Marion LB Nick Reese intercepted White’s pass and returned it to the Marion 47. The Pioneers regained possession as their defense stiffened and forced Marion to punt.  Kent Musick’s punt return set Lebanon up with 1st & 10 on their own 25. Senior RB Seth Stanley would power the Pioneer offense as their 75-yard drive ended with Stanley plowing into the end-zone from about a yard out. The extra point attempt was no good, and the Pioneers had a 12-6 lead.

Marion returned the ensuing kickoff to the 45 yard line. The Pioneer defense held once again forcing the Hurricanes to punt. With Lebanon getting the ball on their own 15, Marion returned the favor and forced the Pioneers to punt. Taking over on the Lebanon 45 yard line, Marion’s running game got back into gear. Reeling off 3 solid gains, the Hurricanes had the Pioneers on their heels. With the ball on the Lebanon 25 yard line, Hamm once again found himself on the receiving end of a Tate touchdown pass to tie the game at 12-12. The two point conversion attempt failed.

The Pioneers offense struggled on the next drive and it ended with a punt. Marion took over on their own 33 yard line with just over two minutes to go in the first half. Relying again on their power running game, they moved the ball on the tiring Pioneer defense. The Hurricanes capped the drive with an 8-yard touchdown run.  After another failed two point conversion attempt, the Hurricanes had an 18-12 lead with :49 seconds left in the half.

Marion then recovered a onside kick on the Pioneer 40 yard line. Lebanon’s defense held for the first two plays and forced a 3rd & 9 on the 39 yard line. Tate then found WR Austin Thomas deep up the sideline setting up 1st&Goal for the Hurricanes. Tate would finish the drive with a TD run to give Marion a 24-12 lead heading into halftime after the Pioneers stopped another 2 point conversion attempt.

On their opening possession of the second half, Marion again leaned on their running game. Taking several minutes off the clock, Hurricanes RB Easton Medley capped off the drive with a 15 yd touchdown run. Medley’s run extended Marion’s lead to 32-12 after they succeeded on the 2 point conversion. 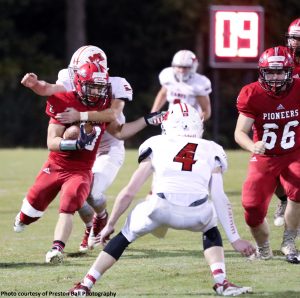 Lebanon’s Casey Martin with a reception

With Stoots returning the Marion kickoff to the 32 yard line, Lebanon’s offense again took the field. White wasted no time hitting a quick pass to WR Casey Martin. A couple more carries by Seth Stanley and the Pioneers were at midfield. The drive stalled on the Marion 49 yard line as a 4th down conversion attempt came up short.

Marion’s offense struck quickly with Tate hitting Hamm on a screen pass which went 51 yards for another Hurricane touchdown. After Lebanon stopped the 2 point conversion attempt the score was 38-12.

The Pioneers drove down the field for what turned out to be their last score of the game. Aided by a roughing the passer penalty on a key third down play, the Pioneers continued to drive down the field. Seth Stanley rumbled into end-zone from six yards out and Gabe Figueroa added on the extra point to bring the score to 38-19.

Closing out the scoring for the Marion offense was Easton Medley with a two yard rushing touchdown with just over 5 minutes left to play. About two minutes later, Marion would block a Lebanon punt to tack on another score. With a final score of 50-19 Marion got the win in Lebanon.

“I was happy with the effort of some components of the team. Oline played well, and WRs blocked great. The WRs got called for some very questionable holding calls,” said Lebanon coach Michael Webb. “A few positions have to learn to play 48 minutes of football and not break when one thing goes wrong.”

“Overall I thought we showed flashes of what we could be and will be in the future,” Webb said. “but we have a tremendous amount of growth to go through yet to get there.”

Next up for the Pioneers is a visit to the G-Men of Graham while Marion will be traveling to Gate City to face the Blue Devils.