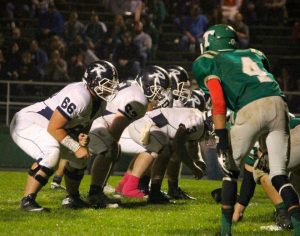 It’s always those specific things that let you down the most.  That job you knew you had in the bag. The girl you thought would be there forever. The people who leave your life too early. Or that game you should have won easily. The first three scenarios have happened to me more times than I would be proud to count. However, it was the last of the four that prepared me for future heartbreak and more.

In the world of Southwest Virginia football, there are only a few rivalries that grab the entire region’s attention. Graham/Beaver, Powell Valley/Appalachia and Honaker/Lebanon just to name a few. On the hilly front of Tazewell County, the Backyard Brawl has been a yearly treasure.  The numbers that you can find on Rick Baker’s FourSeasonsFootball.com only tell part of the story, but those enough are intriguing.

Coming into this 94th meeting between the school nicknamed after the University of Georgia mascot and the team who’s whirlwind like play earned their nickname from former Bluefield Daily Telegraph scribe Stubby Currence, the Richlands Blue Tornado hold a 50-41-2 edge against the Tazewell Bulldogs.

Both towns began their football prowess in 1926. On November 11, 1926–a day that would later become Veterans Day, a 3-0 Richlands squad traveled to Tazewell to take on the 2-4 Dogs. Tazewell dawned purple and gold at the time. Both teams had taken care of Triangle Mountain Institute from Buchanan County earlier that season, Tazewell a 12-0 victor October 2nd and Richlands winning 6-0 18 days later. On paper, it looked as if the team from the western end of the county had the edge, but as we’ll touch on later, that’s not always the case.

Tazewell would win the first game by a score of 6-0, and the rivalry was born. It wasn’t until the 1929 matchup that Richlands would earn their first win in the series by a score of 7-6. It’s been back and forth ever since with Richlands holding the record 15-game winning streak going into this Friday’s matchup.

Some notable numbers throughout the history of the Brawl include –

As it has been mentioned before, the numbers, despite many, don’t always tell the tale.

Case and point, the 2003 matchup. This is where it gets personal.

Both teams were coming in 0-1 on the early year; we had lost to 24-14 to a Gate City squad that would go on to win the D2 state title that year, they had lost a 21-9 contest in Hillsville to Carroll County.

The morning of September 5, 2003 was just like any other game day for me. With a pick in my curly hair and Korn blaring in the speakers of my 1994 Pontiac Sunbird, I fed ducks hash browns, nibbled on my sausage biscuit and perused the Bristol Herald Courier for their weekly picks.

For a dumb 16-year-old outside linebacker from Raven, that was all the confidence I needed for the day.

We knew our enemy personally. Some of which we had fought over girls with at United Skates among other localities. Nothing short of punishing them for 48 minutes would suffice. However, something about this game would be anything but ordinary.

It felt as if we were behind the 8-ball from the get-go. The opening kickoff was fumbled around by Tazewell for what seemed to be an eternity. I was mere yards away from the ball, as were others in blue and white, but still, the Dogs would recover.

All night was a struggle of field position in which we seemed to win, but the score told otherwise as the trash talking was prevalent, but points were not.

Momentum had swung our way in the late stages. Scoring a touchdown, converting a wild, unplanned two-point conversion and then securing the onside kick, it seemed as if everything that had gone wrong throughout the night was finally countering our way late in the 4th.  A missed field goal as time expired sent those from the right in green onto the field in joy and us in the road whites down to our knees.

There were plenty of chances to score for us before that. We traveled inside the 10 four times coming up empty, but the last gasp was a dagger to the gut nonetheless.

Navigating through the Tazewell fans scattered all over the field was a blur for me. I just wanted to get back to the locker room and get the hell out of there. Oh, and those girls that I mentioned fighting over before; they were some of the first onto the field to laugh in our face and enjoy their victory.

That game would be my first heartbreak, and a few of those girls mentioned earlier, would be some of my later.

Google Maps, which wasn’t even a thought in 2003, tells us that it takes 24 minutes to get from Tazewell High to Richlands High. That ride back may have been the longest 18.1 miles of my life.

The season was not a total loss though; we would go on to play in the playoffs while that night was the only night in 2003 the Dogs tasted victory. Despite their 1-9 record, that was far from a one win team as it would show in 2004 when they would play in the D3 state-semifinals on the same day we competed in the D4 state semis.

Many of those wearing green that my teammates and I battled on that balmy September night 15 years ago have since dropped our guard and become acquainted, hell, even friends. Something in the heat of that game and throughout high school would have never been a thought.  After all, life is short and it is just a game.

This Friday night when the Blues and the Dogs meet for the 94th time, don’t forget about those who played, coached and had their hands in the rivalry long before this week that left us all too soon.

People like Cody Thomas and TJ Rasnick, who played just a few short years ago.

Dr. James McVey, who taped me up a few times after a cleat to the shin in that 2003 contest. He taped up many young men in blue during the Brawl.

Terri Mosley, who taught at both high schools, shared her beautiful photography and spirit with kids wearing both green and blue.

Stevie Mitchem, who played and coached for many years in Tazewell, all while seeing some of the best teams from both schools come through.

Aaron Smeltzer, who loved his alma mater, had gone to great lengths to put together what was going to be an excellent documentary on the rivalry.

Finally, a man who made a significant impact in the area, James C. Ramey, a Bulldog by birth, Blue Tornado by marriage, and the man who gave back to both these athletic programs and communities countless times. That’s just one of the reasons the trophy that is gifted to the Brawl’s victor should always bear his name.

Those are just a few who will have from the best seat in the house above Ernie Hicks Stadium Friday night.

The rivalry is back, but hopefully not this year. Go Big Blues!