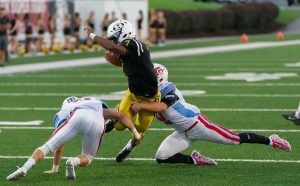 After facing electrical issues at its home field, Radford chose to move this game to Salem Stadium. Many questioned why the game was not moved to Giles but after a Thursday night downpour, Salem’s turf field was the best alternate. Despite the change of location, the few Spartan and Bobcat faithful still made the trip up I-81 to this district showdown.

Giles received the kickoff to start the game. On their first possession, the Bobcat defense played as if they could hear the plays being called, holding the Spartans to negative yardage. Giles went three and out and had to punt the ball to Radford, setting them up at mid-field. Coming into this game, everyone knew sophomore running back P.J Prioleau was the man to watch, and he did not disappoint.

On Radford’s first offensive possession, Prioleau and Marshall took turns powering over the Spartan defense. Radford drove inside the five yard line and it looked like Giles was going to keep them out of the end zone. That was until Prioleau blasted up the middle on a fourth-and-one, giving the Cats their first score of the night.

The Spartans did not come to life until late in the first after trailing 14-0. Radford attempted a screen pass but the ball was deflected and caught by Giles defensive linemen Sky Viars in Radford territory. This looked like the spark that Giles needed but the Bobcat defense continued to play lights out.

After a 38-yard run by quarterback Rupe and a 43-yard field goal by heavy footer Lytton, Radford went in at halftime with a comfortable 24-0 lead. The Spartan fans stuck around hoping for another comeback. In 2016, Radford led Giles 21-0 at halftime, but the Spartans fought their way back to a 36-28 victory. Any thoughts of a comeback shattered when Radford received the kick to start the third and Prioleau returned it 80 yards to the house.

Prioleau scored another touchdown late in the third forcing a running clock as the Bobcats led 38-0. He finished with four TDs.

Radford held Giles to just 75 offensive yards  which is the lowest for the Spartans in nearly a decade.