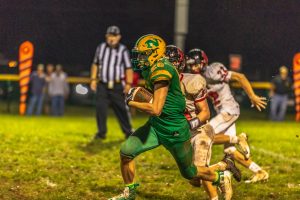 Narrows (4-1) made an impressive run last season after their only regular season loss. Many wondered if they would be able to do the same after suffering their first loss two weeks ago. Narrows running back Matthew Morgan ended whatever doubt the Green Wave faithful had, as he rushed for 195 yards with three touchdowns. Narrows celebrated their homecoming night with a 34-14 victory over a much improved Holston squad.

Last year, Narrows defeated Holston 56-0. Holston (4-2) has improved this season led by quarterback Leo Ezzell who had 15 touchdowns coming into this game. He completed 16-of-28 passes for 220 yards and two touchdowns against Narrows.

The first quarter was a defensive battle until the Green Wave drove down the field and Morgan punched it into the end zone from three yards out. After a failed extra point, Narrows led 6-0. On their next offensive possession, Wyatt Fleeman connected with Chase Blaker for a 44-yard touchdown, extending their lead to 13-0.

This game looked like it might be another shutout until the Cavalier offense got rolling late in the second quarter. Holston drove down to the Narrows 22-yard line. Ezzell then connected with Ethan Guerrero for the Cavs first score of the night. Holston cut into the lead 13-8 after a successful two-point conversion.

The Green Wave answered with a one-yard touchdown run by Morgan to end the half. Narrows led 21-8 after a successful two-point conversion.

In the third quarter, the Cavalier defense stood tough keeping Narrows out of the end zone. With three minutes remaining, Ezzell connected with Austin Faris for a 39-yard touchdown. It was a one touchdown game now with Narrows leading 21-14 going into the fourth.

The Green Wave dominated the fourth quarter. Freeman connected with Reid Bowman for a 21-yard touchdown extending their lead to 27-14 after a missed extra point. Morgan put the game out of reach with a 46-yard run with 1:39 remaining.

Narrows forced five turnovers and held Holston to 54 yards rushing, which is their lowest of the season.

Next game: Narrows travels to Covington to defend their Pioneer District Title. Holston returns home to host the undefeated Rebels of Patrick Henry.