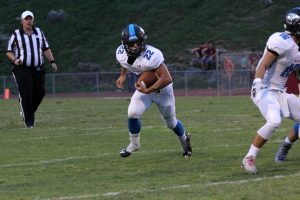 Heading into Friday night’s Mountain 7 District clash with the Lee High Generals, most folks wondered if the Wolfpack would have a letdown after  defeating the Union Bears the week before. 48 minutes later, the Wolfpack delivered an emphatic answer with a 49-7 thrashing of the Generals in Ben Hur.

The Generals received the opening kickoff and were forced to go three and out and punt the ball away.  The Wolfpack didn’t take long to get the scoring started on the evening.  Less than three minutes into the contest, Matthew Sexton broke away off tackle and sprinted 38 yards to the house.  With 9:01 left in the opening frame, the Wolfpack led 7-0.

The Generals then went to work, and behind speedy running back Blake Lewis, managed to run off nearly eight minutes of the contest.  The Generals were brave with their play calling, opting to go for it on fourth down from their own 41 yard line and converting successfully.  However the drive would come to a crashing halt for the Generals as Carson Sykes intercepted a Dewayne Garrett pass deep in Ridgeview territory.  As the first quarter came to a close, the Wolfpack led 7-0.

The Pack went on an efficient drive on their own behind backs Sexton, Trenton Adkins and McKenzie Sproles.  The Wolfpack offensive line had no trouble manhandling the General defensive line, providing room to work with for Sexton, Adkins and Sproles.  Play after play, the Pack gobbled up multiple yards per carry, sprinkling in a couple of passes on the drive from quarterback Tyler O’Quin as Sexton finished off the drive with a one yard plunge into the end zone with 9:15 left in the first half.  With the Joe Meggison extra point, the Wolfpack established breathing room at 14-0.

After the kickoff, the Generals offensive strategy became clear.  Keep the ball out of the explosive Wolfpack offense’s hands by chewing up as much clock as possible.  With Lewis, Devin Goins, Ethan Wynn and Noah Sage eating up yards on the ground, the strategy appeared to be successful as the Generals ran another eight minutes off the clock.  The Generals ran double the amount of plays of the Wolfpack for the contest.  The downfall of the Generals came in hanging on to the pigskin.  Once again, after a long General drive, the Generals turned the ball over, this time on a fumble.  Sykes came up with the recovery for his second takeaway of the night.

With only 1:48 left until halftime, the Wolfpack had little time to work with.  It did not matter.  Trenton Adkins took the handoff on the first play and scampered down the Generals sideline for 60 yards.  Three plays later, the Pack struck paydirt as O’Quin found McKenzie Sproles over the middle for a 14-yard touchdown pass.  With 1:03 left in the half, the Wolfpack were well in control at 21-0. 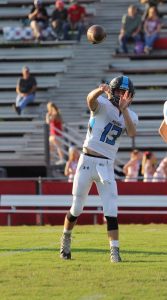 The Generals would get their biggest play of the contest on the ensuing kickoff.  Devin Goins would manage to break free and get 67 yards on the return down to the Wolfpack 29 yard line.  However, the big play would be all for naught as four straight incomplete passes turned the ball over on downs.  The Pack ran off the remainder of the first half clock and at the half, the Pack maintained their 21-0 advantage.

After receiving the second half kickoff, it took all of one play for the Wolfpack to extend their lead.  Trenton Adkins raced away from the Generals for a 77-yard touchdown run.  With 11:42 left in the third quarter, it was all Ridgeview at 28-0.

On the Generals first possession of the second half, they once again experienced success in moving the football with short chunks of yards until a costly turnover ended the drive.  Sykes came away with his second interception of the evening and third takeaway of the contest at the 6:44 mark of the third quarter, returning the ball 21 yards to the Generals 13 yard line. 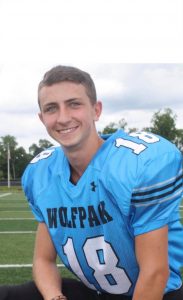 Two plays later, O’Quin found Timmy Hess for a six yard touchdown pass.  With 5:24 left in the third quarter, the Wolfpack held a 35-0 lead.  The Generals would sustain another long drive for 54 yards consuming the remainder of the third quarter and the first 1:04 of the fourth.  “Mr. INT” Carson Sykes then came up with his third interception and fourth takeaway overall, picking off Garrett at the Wolfpack 30 yard line.

Eight plays and 60 yards later, the Pack were on the board again after a Trenton Adkins’ seven yard touchdown run.  With 5:31 left in the contest, the Wolfpack led the Generals 42-0.

With the Wolfpack reserves getting some much needed reps on defense, the Generals were finally able to avoid the shutout with a five play, 70-yard drive capped off by a Blake Lewis four yard touchdown run.  With 2:19 remaining, the Wolfpack led the Generals 42-7.

On the ensuing kickoff, the Wolfpack made a final emphatic statement as Jacob Hensley found a crease and raced 90 yards down the Pack sideline for the final points of the night.  As the final two minutes rolled off the clock, the Wolfpack had the Mountain 7 district victory at 49-7 to improve to 3-0 in district play and 5-0 overall.

The offensive leader for the Pack was Trenton Adkins with 181 yards on 10 carries with two scores.  Matthew Sexton also had an outstanding night with 120 all purpose yards with two scores as well as six tackles on defense.  For the Generals, Blake Lewis ran for 120 yards on 13 carries with one score.  Devin Goins also rushed for 94 yards in the defeat.

Next week, the Pack continue Mountain 7 district play at Gate City.  The Generals have a bye week before traveling to Bullitt Park to take on rival Union.