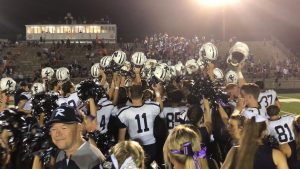 It was a performance to remember in Vinton, Va. on Friday night for Taylor Horn.

Richlands’ leading receiver returned from a dislocated elbow in the week two matchup with Union to help lead the Blue Tornado past the William Byrd Terriers.

Byrd — which honored the life and memory of a fallen classmate before the game — came out strong, marching the ball straight down the field behind sensational quarterback Samuel Dantzler. He capped off the drive with a 32-yard score to put the Terriers up 7-0 early in the first quarter.

It didn’t take long for the Blues to respond.

Quarterback Race Moir found Horn for a 66-yard strike to knot the game up at 7.

The teams traded touchdowns in the second quarter as well; Dantzler on a 1-yard dive followed by a 13-yard pass from Moir to Horn with under a minute to play in the half.

The second half didn’t disappoint.

Byrd again scored behind the legs of Dantzler to push the Terrier lead back to seven. But once again, the Blues responded.

On the ensuing possession, Moir found Horn for their final of three touchdown connections, this time on a 53-yard pass.

For all of the offensive prowess in the first three quarters, it came down to special teams at the end.

Richlands kicker Levi “Fle” Forrest booted a pair of kicks through the uprights in the fourth quarter. A 33-yarder to take the final lead and a school record tying kick of 48 yards to sealed the victory.

Richlands now stands at 2-2 and head into yet another tough matchup against the defending West Virginia AA State Champions Bluefield Beavers.

Kickoff set for 7 p.m. at Ernie Hicks Stadium on Friday.