The Abingdon Falcons hit the road this week to Norton for a road game with the Warriors of Wise-Central.  Abingdon (3-2) looks to get back in the win column.  While Wise-Central (1-3) comes off a big loss to a talented Graham team that is putting up some big numbers in the Southwest District.  This game will be a Mountain 7 District match up and neither team can afford to drop another game midway through the season.  Abingdon dominated the previous meeting 46-14 on their home turf.  However, this time they will face the Warriors on the road.  This will be a test for both teams moving forward to see who can shake off the previous week’s loss and come ready for the challenge at hand.

The sophomore running back had 22 carries for 116 yards last week. Crabtree did most of his damage on the ground between the tackles with a long run of 47 yards. The Warrior running back will try and attack the interior of Falcon defense with his pounding style of running.

Senior TJ Taylor looks to continue his performance from last week against Hidden Valley.  He definitely opens up the big play options from a corps of receivers that make dynamic plays downfield and creates matchup problems for defensive secondaries. Taylor had two big grabs from the slot position for a total of 76 yards including a 56-yard touchdown pass last week. 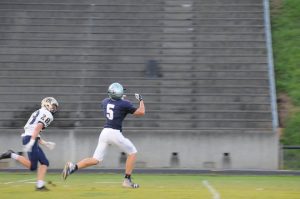 Limit turnovers- This could be their biggest key. Turning the ball over could spell trouble for the Warriors.  Keeping Abingdon’s offense off the field with their running game will be huge.

Shorten the game- The Warriors will need to limit the number of offensive plays the Falcons have.  Abingdon can strike quick and often if given the chance to score.  The best defense for Central will be long sustained drives by their offense.

Quick start from the offense- With a quick start on offense, the Falcons will control the momentum. It will allow their defense to take advantage of the Warriors trying to play catch up