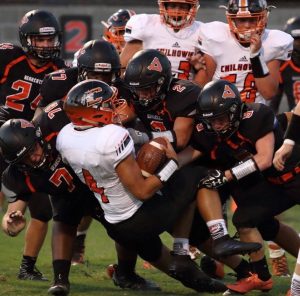 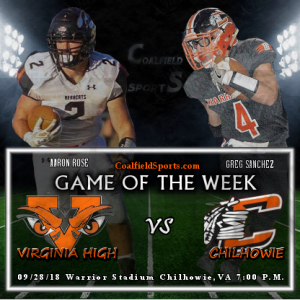 On Friday night, Smyth County will be the place to be when the Chilhowie Warriors (5-0) host the Virginia High Bearcats (3-1).

The Warriors, the last team standing from far southwest Virginia in 2017, return 20 starters from a team that advanced to the 1A state championship game. They are led by one of the area’s top coaches in Jeff Robinson. Coach Robinson’s squad features a multitude of playmakers on both sides of the ball.

Senior running back Greg Sanchez and senior quarterback Zack Cale lead an explosive offense that has basically scored at will against their five opponents so far this season. The Warriors defense is led by all-state linebacker Logan Branson.

In 2018, Chilhowie has already avenged two of their three regular season losses from 2017 in the dismantling of Marion (33-6) and George Wythe (39-0). They will get the chance to avenge their final loss of the 2017 regular season when the Bearcats come to town. In their most recent game, Chilhowie opened up a 52-point lead at halftime, before calling off the dogs and finishing with a 59-9 win against Northwood.

So far in 2018, Virginia High has been the area’s biggest question mark. Loaded with experience and talent, the Bearcats have played in four close games, when most fans in the area expected at least a couple of blowout wins. Regardless of expectations, the Bearcats have won three games, all while developing some very crucial depth.

Something that the coaches in the area have known for years is coming to the light for fans across the region. It is that Aaron Rose is one of southwest Virginia’s best. Rose leads the Bearcat offense in rushing yards, rushing touchdowns and also leads the defense in tackles.

Davidson is having an all-state type season as a cornerback with four interceptions through four games, including a 75-yard pick-six against Wise-Central two weeks ago. Austin has also found the end zone as a wide receiver and as a kick returner.

After a bit of an unexpected slow start to the season, four-year regular Lathrop had his coming out party of 2018 in the Bearcats’ last game, two weeks ago against Wise. Lathrop completed 75 percent of his passes in that game–three went for touchdowns.

Ratcliffe made his first start at safety in the Bearcats’ last game and collected 10 tackles, while continuing to flourish in his other roles as kicker, punter and wide receiver.

While the overwhelming majority of the region expecting Chilhowie to keep rolling this week, the one thing that is for sure is head Bearcat Michael Crist and his staff worked diligently during their bye week to prepare the Bearcats for an all out battle in Chilhowie.

*SPECIAL NOTE*  On behalf of CoalfieldSports.com and Bearcat Nation, thoughts and prayers are with the entire Chilhowie community after the tragic loss of Will Walker, former student athlete, coach and teacher at Chilhowie High School.

Don’t forget, Bearcat fans, you can listen to EVERY Bearcats football game on your favorite device at Spreaker.com/bearcatradio