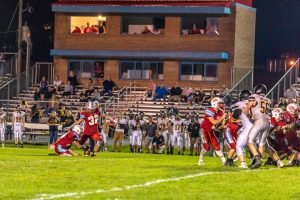 The game began as an offensive showdown in the first half quickly turned into a defensive stand off in the second half. Both Giles and Floyd rushed for a combined 645 yards.

Floyd won the toss and elected to defer. The Spartans received the opening kickoff and went right to work in single-wing fashion. Giles drove down the field picking up a first down on every play. Wing-back Chase Fleeman capped off the 70-yard drive when he took the ball on a reverse from Floyd’s 21 yard line and drug his defender into the end zone. This gave the Spartans their first score of the night and a 7-0 lead early in first quarter. 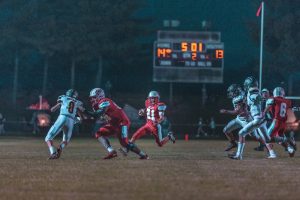 From there it was a shootout. On the ensuing drive, Floyd used their rushing attack, driving down to the 15-yard line of Giles. Running back Hunter Adkins took the ball up the middle untouched giving the Buffaloes their first score of the night. After a successful extra point, the game was tied at 7 late in the first quarter.

The Spartans wasted no time answering the Floyd touchdown. Logan Greenway received the kickoff for Giles and made it to the 46 yard line. On the next play, full back Hunter Williams blasted up the middle for a 54-yard touchdown. The Spartans took the lead 14-7. 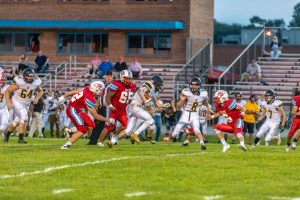 Not to be outdone by Giles, the Buffaloes used the ground game once again and drove down to the six yard line of Giles. Presley Yates took the ball up the middle and into the end zone. The missed extra point maintained a 14-13 Giles lead.

Giles got the ball back with under a minute remaining. They drove down into Floyd territory but ran out of time. The Spartans and Buffaloes went in at halftime tied at 21.

You would expect the second half to be much like the first but that wasn’t the case. Both defenses made adjustments at the half and played lights out until late in the fourth quarter.

With the game tied at 21, Giles got the ball at its own 41-yard line after a shanked seven yard Buffalo punt with 7:15 remaining in the game. The Spartans ate up five minutes off the clock driving the ball down to the Floyd 25 yard line. Facing a fourth-and-ten, head coach Jeff Williams called for the field goal unit. Wilson, who missed a crucial extra point in last weeks victory over Narrows, nailed the 42-yard attempt but the whistles blew right before he booted it. Floyd was called for encroachment, moving the ball up to the 20, making it a 37-yard field goal attempt. Once again, Wilson nailed it, putting the Spartans on top 24-21 with 1:55 remaining.

The Buffaloes had plenty of time though. Floyd received the kickoff and took it near midfield but it was negated due to a holding penalty. This moved the ball back to their own 30 with 1:48 remaining. After a few good rushes and a personal foul by the Spartans, Floyd was close to the red zone with ten seconds remaining.

The Spartan defense stood tough on the next play sacking the quarterback but a horse collar penalty put the Buffalos inside the 15 yard line with 1.7 seconds left. Instead of attempting a game game-tying field goal, Floyd head coach Winfred Beale chose to go for the win. 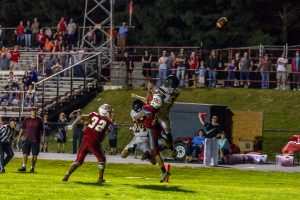 Quarterback Jared Nichols’ attempted a desperate throw into the front left corner of the end zone where two of his receivers were, but the Spartan defenders broke up the pass. The Spartans sealed the victory.