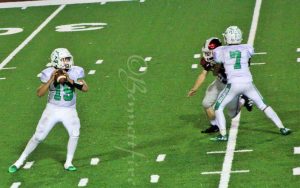 In the September 2017 matchup between the Tazewell Bulldogs and the Bluefield Beavers, there was no shortage of offense. Don’t expect 2018 to be any different.

The West Virginia State Champion Bluefield Beavers beat a young Tazewell team that night at Mitchell stadium to a final score of 62-27.

Kennedy Award Winner running back Mookie Collier is a member of the Marshall Thundering Herd and fullback Jason “Truck” Edwards is now a Pitt Panther. However, that hasn’t slowed the Beavers.

Led by Ronnell Blevins, Jamere Edwards, Chandler Cooper and Arnold Martin, the Beavers roll into Bulldog Stadium scoring an average of over 49 points through three games this season. The Beavers are once again 3-0 and have given up a mere 21 points to this point. The #1 ranked Bluefield Beavers are clicking on all cylinders and have already defeated their border rival Graham and county rival Princeton.

Tazewell’s running game is much improved from 2017. Sophomore stand-out Chancellor Harris has ran for over 500 yards through three games. Tazewell’s offensive line has helped pave the way to where the Dogs are averaging right at seven yards a carry. Quarterback Jamir Blevins is coming off a 61-38 win over River View where he threw for 121 yards and a touchdown against the Raiders. The Dogs are 1-2 and look to improve and make the playoffs in 2018.

It’ll all go down at Bulldog Stadium Friday, September 21st at 7 p.m..

How do you see the outcome of this game? Comment below!