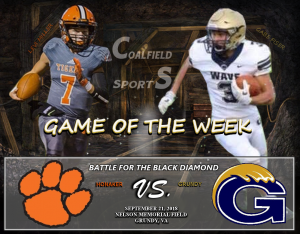 At the Honaker Tigers media day, Doug Hubbard said that the Black Diamond District was Grundy’s until someone knocked them off.

Luckily for Hubbard, his Tigers will get a chance to do just that in the CoalfieldSports.com Game of the Week as Honaker travels to Grundy.

“I expect them to be ready to play. I expect both teams to be ready. I think it’s gonna be a great atmosphere,” Hubbard said Wednesday. “This becomes a huge game. I have always been a believer that you’re the top dog until someone can knock you off.”

Hubbard knows his squad will walk into Nelson Memorial Field with a tough opponent on the opposing sideline.

“They’re the top dog, that’s how we’ve got to look at it,” Hubbard said. “We’re gonna play a great team. Their running back is really good, the quarterback is good, the wide receivers are good. The offensive line is playing well. They have a good defense. They are very solid.”

Both teams are coming off a bye week and have had an extra week of preparation for the Black Diamond’s biggest showdown so far in 2018.

With all the chaos in scheduling due to Hurricane Florence, maybe it was a blessing in disguise for both the Tigers and the Golden Wave.

One thing is for certain though. When both teams take the field Friday, Nelson Memorial Field will be jumping.

Grundy (2-1) rolls into this contest on a two game wining streak after dropping to 2A powerhouse Ridgeview in week one. In the past two outings, Gabe Fiser has been the story for Grundy. The senior tailback broke the Grundy record for most yards in a game in back to back weeks. The speedster had 336 against RiverView before besting that a week later with 338 against Lebanon. Fiser is well on pace to 2,000 yards with a three week total of 757 yards. The three-time state champion wrestler has found his way to the end zone eight times this season.

Jacob McCoy looks for another big game for Grundy in his first outing since being named the CoalfieldSports.com Defensive Player of the Week in week three. The junior has been a threat to Golden Wave opponents as a receiver and a defensive back in the early going.

Across the way, Honaker has started out at 3-0, its best start since 2015. In the early going, Honaker has already claimed the Russell County championship with wins over Lebanon and Castlewood. The Tigers are also a leg up in the BDD race after a 47-8 trouncing of the Twin Valley Panthers.

While the hype going into this one may be around Fiser, the Tigers have a stout running back in their stable as well.

“He runs hard. He loves the game. He wants to be good. He works extremely hard,” said Hubbard of Dye. “He lines up, he’s going to give you everything he’s got. He’s gonna run as hard as he can.”

Aside from Dye, Levi Miller has been solid so far for Honaker as well as Hubbard’s son, Chandler.

“Levi has done a very good job running our offense. He’s taken care of the ball very good. He is distributing it well,” Hubbard said. “Chandler has been solid; we’ve moved him around a lot. He’s a good athlete. He’s very smart. He’s been having a good year.”

Both of these teams are very similar in each position. At one time, Grundy may have had an edge at the line of scrimmage. However, as the season has progressed, so has the line play of the Tigers.

At the end of the day, this one will be worth the price of admission. With high stakes and similar strengths, these two district foes will step up to the challenge.

The stat man will need a new pencil when it comes to rushing yards to keep up with Grundy’s Fiser and Honaker’s Dye.

As for Hubbard, he has high hopes for this upcoming Friday.

“Hopefully, we can hold up our end of the bargain and make this thing a great ball game,” said Hubbard.