The Abingdon Falcons are on their home turf this week for homecoming against the Hidden Valley Titans at Falcon Stadium. The alumni should be abundant in attendance. There will be plenty of festivities and action as these two 3A teams take the field. Abingdon (3-1) looks to build off their win from last week over Christiansburg.  While Hidden Valley (0-4) searches for a win in what has been a disappointing season so far.

The 6′ 2″ junior signal caller has the size and arm. Carroll was 7-of-24 passing for 76 yards but had three interceptions in a losing effort to Franklin County. The Titans quarterback will have to clean up those turnovers and find some open spots to get the ball to his wide-outs.

Thayer looks to continue where he left off with a stellar defensive performance last week against Christiansburg.  Thayer was stellar on defense against the Blue Demons recording 12 tackles, two sacks and an interception. He also will be looked for to make big plays on offense.  A solid ground game should open the air attack for Gabe Boothe to find Thayer downfield. 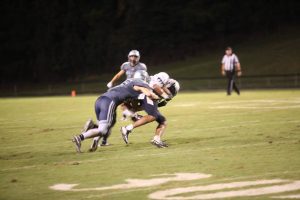 Avoid the big plays- Abingdon has shown it has big play ability and if the Titans can avoid allowing the Falcons to strike quick, they can stay in the game.

Limit turnovers- This could be their biggest key. Turning the ball over could spell trouble for the Titans.  Recent weeks have shown in their losses they turn the ball over.

Shorten the game- The Titans need to limit the number of offensive plays the Falcons have.  Abingdon can strike quick and often if given the chance to score.

Quick start from the offense- With a quick start on offense, the Falcons will control the momentum. It will allow their defense to take advantage of the Titans turnover troubles that have plagued them thus far this season.

Spread the ball around – The Falcons can score at any skill position.  They will have to keep the Titans guessing where and when the strike will happen.