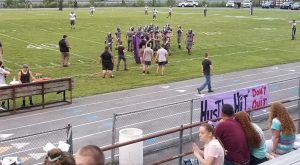 Twin Valley takes the field before Thursday’s game with Northwood

The football field in the small Buchanan County community of Oakwood that hosts Twin Valley High School games is sometimes referred to as the “House that Roger Rife built.”  The legendary coach of the Garden Green Dragons nearly won a state title in 1986 behind his stout defense.

Those Garden Green Dragons eventually consolidated with fellow Buchanan County compatriot Whitewood in 2001 to form Twin Valley High School.  Even though Garden and coach Rife were known for their defense,  Twin Valley’s offense led by Brandon Lester that was the star attraction at the show Thursday night.

Lester accounted for six TDs as the Panthers of Twin Valley defeated the Panthers of Northwood, 52-30.  The “Battle of the Panthers” was moved up to a Thursday night affair to avoid possible weather complications due to Hurricane Florence.

As the contest got underway, it became apparent that the long travel of the Smyth County Panthers through the mountains to Buchanan County may have taken its toll.  Northwood accounted for four turnovers in the opening quarter.  Two of those came on consecutive touches as Northwood fumbled the ball away on its opening play from scrimmage and then muffed a punt that Twin Valley recovered.  Twin Valley could not capitalize on the generous gifts Northwood was presenting though.  After two interceptions by Northwood, Twin Valley finally got on the board with 1:29 left in the first quarter on a five yard run by Lester.  The two point conversion was good and Twin Valley led Northwood 8-0 at the end of one quarter of play.

With 9:06 left in the first half, Twin Valley and Lester would strike again, this time from one yard out.  The two point try would prove unsuccessful this time and Twin Valley led 14-0.  The boys from Smyth County would finally show signs of life on the ensuing kickoff.  Michael Frye shook free to take a kickoff return 60 yards to put Northwood on the board at 14-6 with 8:54 left in the half. A possession later, Twin Valley established a passing threat before giving the ball to their moneymaker, Lester, for his third score of the night from two yards out.  With 4:19 left in the half, Twin Valley was ahead 20-6.  Northwood returned the favor on a long drive of their own. However, the momentum Chris Duble’s team was building came to a crashing halt as the ball was turned over on downs at the one inch line.  At the half, the Panthers from Buchanan County were in control by a score of 20-6.

Early in the third quarter, Twin Valley added a safety after the Northwood ball carrier was brought down in their own end zone.  With 9:51 left in the third, Twin Valley extended their lead to 22-6.  Off the free kick, the Panthers would extend the lead even further. Three minutes later, Lester proved he was also a gunslinger on an eight-yard touchdown pass.  The two-point try from Lester was also successful.  At the 6:52 mark of the third, Twin Valley was well in control 30-6.  Northwood would once again gain momentum by way of another long kick return.  A little over a minute later, Northwood was able to put points on the board via a five yard quarterback keeper from Gage Hogston.  The two-point try was good, and at the 5:28 mark of the third, Northwood had closed the lead down to 30-14. It only took 13 seconds for Twin Valley to answer.  Xzavier Ward got around left edge and raced 37 yards to the house to once again extend the Twin Valley lead to 38-14 after the successful conversion.  Northwood would not die. The next possession Hogston found Michael Frye for his second touchdown of the night from four yards out. The conversion was good and with 1:50 remaining in the third, the score read 38-22 in favor of Twin Valley.

On the first play of the fourth quarter, the Brandon Lester magic returned.  Lester scampered away from the Northwood defenders on a 47-yard touchdown dash for his fourth touchdown of the night.  Lester also ran in the two point try and with 11:49 remaining, Twin Valley extended their lead to 46-22.  Northwood yet again answered.  Hogston utilized the quarterback sneak yet again and scored from nine yards out. After a jump pass on the two point try that would make Tim Tebow proud, Northwood had cut the deficit to 16 at 46-30. Twin Valley and Lester put the finishing touches on the scoring for the night as Lester raced into the clear for a 60-yard exclamation point.  With 7:03 remaining, Twin Valley was up 52-30, which would be the final. Twin Valley’s victory was the first over Northwood in school history. The win moves Twin Valley to 3-1 with the winless Craig County Rockets (0-4) making the long bus ride to Oakwood next Friday night.  The loss drops the Northwood to 1-3. The good news is the road trip next week for Northwood is only eight miles up route 107.  The bad news is the road trip next week is to defending Class 1 state runner up, the undefeated Chilhowie Warriors (4-0).