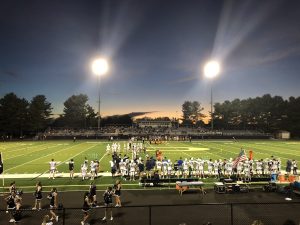 As good as advertised.

That’s about all you can say for the Blacksburg Bruins.

The Bruins showcased exactly why they have earned the distinction of a contender for the Class 4 title. A poised gunslinger quarterback, that the PA announced actually compared to Brett Favre, matched with a plethora of receivers led by UVa-commit Tiquest Terry were too much for the Blue Tornado.

In a game with no atmosphere (being played at Christiansburg instead of Blacksburg), the Blues came out flat. The opening play of the game was a pass from quarterback Race Moir to wideout Jakob Cole in the flat. The ball flew off Cole’s fingertips and was picked off by the Bruins. One play later, Blacksburg running back Brian Mitchell found the end zone.

It was on from there.

The Blues couldn’t get the edge against a speedy defense, and the run game struggled as the Bruins loaded the box.

The lone bright spot for the Blues in the first half came at the end of the half. Facing a 35-0 halftime deficit, Richlands mounted a drive down into Blacksburg territory that ended in a 41-yard Levi Forrest field goal as time expired to make the score 35-3.

As both teams huddled behind the end zone on the scoreboard end of the field, the message from Blue Tornado head coach Greg Mance was simple: win the third quarter.

After a Blacksburg fumble by Terry, the Blues went to the ground straight into the teeth of the defense and flourished. Gashing runs by Moir, running backs Trey Brown and Logan Steele and some key passing lead to Blues to pay dirt to cut the lead to 35-10.

After a defensive stand that saw Zack Moore live inside the Bruins backfield, the Blues got the ball back and went right back to work. Another long drive led in another score, as the lead was cut in half at 35-17.

Give credit where credit is due, the Blues answered Mance’s challenge and passed.

But you also have to give credit to the Bruins.

On the second play of the fourth quarter, Grant Johnston worked his magic again. The senior quarterback got the ball out of his hands to a streaking Karim Mohamid for a long scoring strike. After a stalled Blues drive, the offense came out again and Johnston found Coffey on a prayer as three Blues barreled down him for another long touchdown.

Blacksburg’s Johnston finished his day 20-27 for 460 yards and six touchdowns.

There was some good news for Blue Tornado faithful, however. After the game, Mance made the announcement that WR/DB Taylor Horn will be back in action against William Byrd. The senior standout missed  the Blacksburg game and the second half of the Union game with a dislocated elbow.

The Blues continue their road trip on Friday when they travel to Vinton for a game versus the 4-0 William Byrd Terriers. That kickoff is set for 7 p.m..