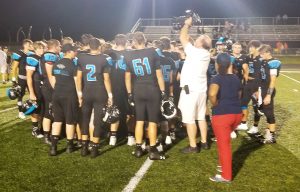 Coming into Friday night’s Mountain 7 District showdown with Union, junior linebacker Alijah Sproles was brimming with confidence.  “They (Union) better be ready,” said an excited Sproles after the victory over Wise Central last Friday. “We will be.”

The Wolfpack were indeed ready.  In a masterful defensive performance that would make some of coach Rick Mullins’ Clintwood teams of days gone by proud, the Wolfpack defeated the perennial power Union, 27-14.

In the early going, the signs pointed to Union once again prevailing with some stout defense of their own.  The Bears received the opening kickoff and was unable to muster any momentum on their first series.  The Wolfpack then went to work, but quarterback Tyler O’Quin was picked off by Avery Jenkins.  After another series in which the Bears were unable to amount any offense, the Pack again took over after a Union punt.  Things began to look even more grim for the hungry Pack.  The Pack fumbled a handoff which was recovered by Trenton Adkins.  The sophomore tailback tried to advance the ball afterwards and fumbled again.  The Bears recovered well inside Wolfpack territory.

Union would soon make the Pack pay for their mistakes in the early going, as quarterback Bailey Turner found Noah Garrison for a 29-yard scoring strike.  After the successful extra point try, the Bears were off and running with a 7-0 advantage with 4:10 left in the first.

For the remainder of the quarter, both teams played stellar defense and no points were scored.  However, early in the second, the Pack went to work.  Sustaining a long drive that chewed up several minutes of the clock, the Pack eventually worked their way deep into Bear territory.  It appeared catastrophe would strike again, as Adkins fumbled into the endzone.  Wide receiver Timmy Hess pounced on the pigskin and avoided disaster sending Wolfpack Nation into delirium with the Pack’s first points of the evening.  With 3:26 to go in the first half, the score was deadlocked at 7.

The Pack began to assert themselves as the better team on the evening from that point forward.  After a quick three and out from the Bears, the Wolfpack were left with little time to get a quick score before the half.  O’Quin showed tremendous poise and deft ability with the two-minute drill skills.  O’Quin was able to garner a massive momentum boost for the Pack by finding Quinn Turner in the back of the endzone with only eight seconds before the break.  With no time to work after the kickoff, the Bears took a knee and at the half, the Pack were ahead with big “Mo” behind them at 14-7.

The Pack received the kickoff to begin the second half and gobbled up clock with another long sustained drive.  The two headed monster of Adkins and Matthew Sexton churned out the yardage over the drive.  The drive was capped off with 5:43 to go in the quarter as Adkins plunged into the promised land from one yard out.  The Pack went ahead by two scores and maintained the advantage through the remainder of the quarter.

As the fourth quarter began, the Bears were on the hunt, but were faced with a fourth and one from the Wolfpack 35 yard line.  The Bears converted behind big fullback Mason Polier.  The drive would end as the Pack were able to intercept a Turner pass on third and long.  On the ensuing possession for the Pack, O’Quin threw his second interception of the night to Garrison of the Bears, who returned it all the way back to the Wolfpack six yard line.  The Pack hunched on their heels on defense and kept the mighty Bears out of the endzone for three consecutive plays.  On fourth and goal from the one, Avery Jenkins was able to find paydirt.  With 6:23 remaining in the contest, the Bears had cut the Ridgeview lead to 21-14.  The Wolfpack would soon put the contest out of reach on the ensuing possession.  Eating up clock, Matthew Sexton put the exclamation point on the Wolfpack’s biggest win ever by evading defenders with his deceptive speed.  Sexton scored from 29 yards out with 3:19 remaining to make the score 27-14.

The Bears tried to mount one final charge, but it was not meant to be as they turned the ball over on downs.  The Wolfpack ran out the remaining seconds and a jubilant overflow Wolfpack Nation partied on the Ridge. Ridgeview would reign victorious on Homecoming 2018.

Leading the way for the Pack on offense was Trenton Adkins who had 119 yards on 24 carries with one TD.  Matthew Sexton also had a stellar night rushing for 93 yards on eight attempts and the game clinching score.  Mason Polier led the Bears offense with 64 yards on 13 carries.  The shining star on this night however, was the Pack defense who limited the potent Union offense to only 157 yards of total offense.

The Wolfpack still have a long way to go in recording their first Mountain 7 district football title, but a major hurdle was cleared on the journey on Friday night.  Next week, the Pack travel to Ben Hur to take on the Generals of Lee High at venerable Five Star Stadium.  Union travels to Gate City’s Legion Field looking to rebound from a rare district loss.

2 thoughts on “ATOP THE MOUNTAIN: Wolfpack defeat Bears 27-14”