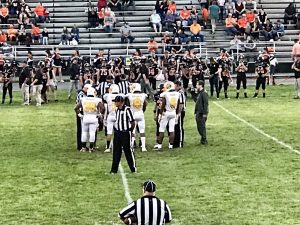 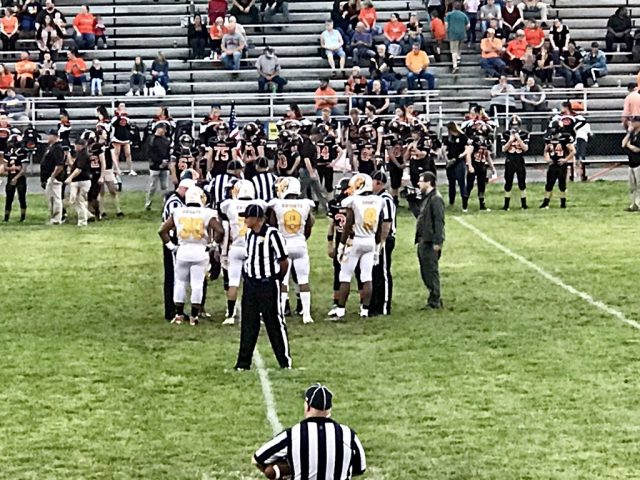 The Mount View Golden Knights found out early this week that they were ranked #1 in the 1A WVSSAC rankings.

They also found out that due to incoming Hurricane Florence their game against the Summers County Bobcats would be moved up to Thursday.

The high expectations, the short week of preparation and the long drive to Hinton seemed to take a toll on the boys from Welch. The #1 ranked Golden Knights found their selves down 13-7 at the half. However, a stellar second half performance by the Knights defense & Elijah Barner’s two touchdown runs helped the Knights mount a comeback to leave Summers County with a 34-13 win. The win also gives the Knights their first 4-0 start since 2005.

Summers County controlled the time of possesion in the first quarter as quarterback Timmy Persiani orchestrated the Bobcats’ offense. Persiani found the speedy Christian Pack for a 12-yard touchdown pass with 6:34 remaining in the opening period to put the first points of the night on the scoreboard. Jonathan Angles’ extra point attempt split the uprights to give the home team a 7-0 lead.

Mount View’s offense started to show signs of life in the second quarter before Jesse Rose’s pass was intercepted by the Bobcats’ Brandon Adkins. However, the Golden  Knights’ defense held strong and forced a punt. Mount View then found the endzone for the first time of the night with a 20-yard touchdown scamper by Ty Powell. Justin Haggerty’s extra point attempt was good to tie it at 7-7 with 6:50 to go in the second quarter.

That was when the poised Persiani and the Bobcats’ offense took over and made it a point to regain the lead.

A few tough runs by Pack and a few bullet throws by Persiani marched Summers County right down the field. Persiani once again found Pack for a touchdown, this time from 17 yards out. The Bobcats elected to go for two and failed, keeping their score advantage 13-6 with 3:20 to go in the first half.

The Knights could not mount a matching drive, so the Bobcats’ took their 13-6 lead into halftime.

It was a bizarre first half for Coach Larry Thompson’s team. Their normal high-octane offense was held to seven points, and their usual stingy defense had gave up two touchdowns through the air. The Knights came into week four averaging 41 points per game on offense and were only allowing 8 points per game to their opponents.

“Traveling to Hinton takes a toll on you coming from Welch,” said Thompson. “We came out flat to start the ball game and it showed.”

However, to the Knights’ joy, this game was a tale of two halves. Mount View used their depth and their halftime adjustments to their advantage in a dominant second half showing. One in which they outscored Summers County 27-0.

Mount View was able to get their offense on track to open the second half, as their offense marched down the field with ease. Elijah Barner tied the game up when he hauled in a 12-yard scoring strike from Jesse Rose with 7:40 remaining in the third quarter.

After the Knights’ defense returned to their normal form and forced a punt, Barner & Mount View’s offense opened the floodgates.

Barner scored on a 10-yard run with 2:02 left in the second quarter and reached pay dirt with a 57-yard run to open the fourth quarter, which stretched the Knights’ lead to 27-13.

On the next drive, Persiani tried to lead his Bobcats’ to a comeback. However, he was stopped in his tracks as Mount View defensive back Jasauni Saunders intercepted a pass intended for Pack. Saunders had an exceptional game, with 11 total tackles and an interception.

Powell finished with 101 yards rushing and two scores on the night. Terry Headen was also an effective weapon for Mount View, carrying the ball 11 times for 104 yards. Barner was his usual self. The senior finished his tour of Hinton with 17 carries for 160 yards, one catch for 12 yards and three total touchdowns. The Golden Knights’ captain was also a standout on defense, with 10 tackles (3 for loss) and a sack from his linebacker position.

Coach Thompson was happy with how his team responded after a slow first half.

“We made a few minor adjustments defensively to get more pressure on the quarterback and to throw the timing off with the wide-outs. They have a few talented players that we had to contain the second half. The boys woke up and stepped their game up and played at a high level the remainder of the game.”

The Golden Knights’ will defend their #1 ranking for the first time this season at home next Friday, as the Webster County Highlanders will visit Vic Nystrom Stadium in Welch.