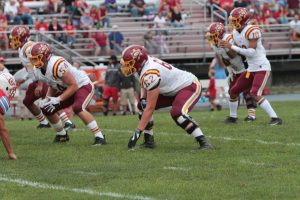 Fans packed in Steven C. Ragsdale Field with their umbrellas and ponchos as a storm appeared to be brewing. However, the rain held off long enough for a great night of football.

The Spartans (1-2) won the toss and elected to receive. On Giles’ first possession, the single-wing was in full effect. After a couple of first downs, tailback Chaston Ratcliffe broke loose for a 44-yard touchdown. Ratcliffe left the game early in the third quarter with an injury. He rushed for 144 yards and a touchdown on 22 carries. 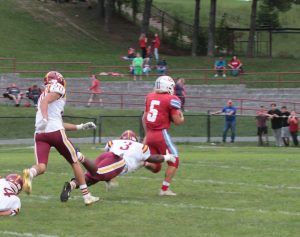 Giles led 7-0 with seven minutes remaining the in the first.

The G-Men started their first drive from their own 20 yard line. Purdue-commit Cam Allen wasted no time trying to get Graham to answer Giles’ touchdown. On their first play, Graham receiver Chris Shinault went deep and had a five yard lead on the defender but Allen put too much arm into it and overthrew Shinault. The Spartan defense tightened up their coverage and forced the G-Men to go three and out. Giles led 7-0 going into the second quarter.

The G-Men got their first score late in the half on a 57-yard run from Allen. The Spartans got the ball with three minutes remaining in the second quarter. Ratcliffe and fullback Hunter Williams picked up multiple first downs to get Giles into the red zone. With under a minute remaining, Ratcliffe attempted a pass but a Graham defender picked off the pass. This was the second time in the first half that the Spartans made it into the red zone but failed to get any points. The game was tied at 7 going into halftime.

The G-Men received the kickoff to start the third quarter. On their first drive of the second half, Allen took it to the house again on a 49-yard rush. This gave Graham their first lead of the night, up 13-7 after a blocked extra point. The Spartans tried getting their offense rolling again with back up tailback Logan Greenway. However, the G-Men defense stood their ground and held Giles scoreless in the third.

Then came the fourth quarter. Leading 13-7, Allen connected with Devin Lester for a 50-yard touchdown. Graham thought they put the game away after that TD leading 20-7 but the Spartans kept fighting. Greenway marched the Spartans down inside the five yard line but could not convert on fourth and goal from the 3. However, on the next play the G-Men fumbled the ball and Giles’ Kip Green recovered the fumble and walked into the end zone for a TD. Graham was still on top 20-13 with five minutes left in the fourth quarter.

After an unsuccessful onside kick for the Spartans, Allen hooked up with Shinault for a 51-yard touchdown. That would be the score that clinched the win for the G-Men.

Next game: Giles will travel to Narrows. Graham will have a bye week.