The Abingdon Falcons are back on their home turf this week for a non-district match up with the Christiansburg Blue Demons at Falcon Stadium.  Abingdon (2-1) looks to get back in the win column, while Christiansburg (1-2) searches for a formula to offset the heartbreaking loss to Liberty last week.  This game will be played on short preparation by both teams. They will play on Thursday due to inclement weather pending from Hurricane Florence, which is set to arrive on Friday.

The sophomore signal caller will be looking to improve on his performance from last week. Hunter was 11 for 15 passing for 151 yards in a losing effort to Liberty. The Blue Demon quarterback will try and attack the Falcon defense with his talented receivers and running game from Mac Padgett.

Boothe looks to bounce back from a sub-par performance last week at Pulaski and light it up this week . He will be looking for big plays from a corps of receivers to make dynamic plays that include Tyler Thayer, Holt Dotson, River Carter and TJ Taylor.  A solid ground game should open the air attack with Martin Lucas pounding out yards. 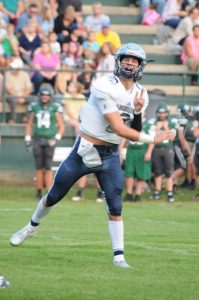 Limit turnovers- This could be their biggest key. Turning the ball over could spell trouble for Christiansburg.  Keeping Abingdons offense off the field will be paramount for any success.

Shorten the game- The Blue Demons need to limit the number of offensive plays the Falcons have.  Abingdon can strike quick and often if given the chance to score.

Quick start from the offense- With a quick start on offense the Falcons will control the momentum. It will allow their defense to take advantage of the Blue Demons trying to play catch up