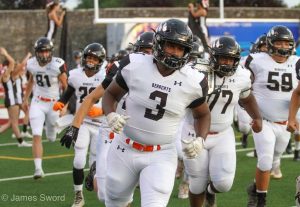 Expectations for this game by most fans in the region, were for the undermanned Bearcats to go into the Stone Castle and get roughed up by the 5A Vikings. This game did not meet those expectations.

In an extremely physical game, the 2A Bearcats fought, scratched and clawed with the bigger Tennessee High squad before finally running out of gas late in the 4th quarter.

With one of the best teams that Tennessee High has produced in recent memory, the Vkings were able to make some key plays late. This effort was enough to pull away from the resilient group from the Virginia side, but not before the Bearcats made the Viking faithful sweat for three quarters.

The Bearcats won the opening toss and elected to receive and put together a near-perfect drive for a touchdown on a 1-yard read-option run from quarterback Jamie Lathrop. The ensuing possession saw the Vikings march down the field with their own near-perfect drive to tie things up at 7. Virginia High then drove the ball down the field into the Vikings red zone on their second drive. However, the Bearcats committed the first of their four turnovers on the night, with an interception in the back of the endzone. The Vikings were able to turn the Bearcats’ mistake into points, with another efficient drive, to take a 14-7 lead.

A field position battle from both teams took the game into the second quarter. Tennessee High running back Charles Kimerer scored on a 22-yard run, to give the Vikings some breathing room at 21-7. After a stalled drive by the Bearcat offense, Tennessee High took possession with just a few minutes remaining until halftime. The Bearcat defense stood tall and senior cornerback Austin Davidson hauled in the first of his two interceptions on the night. After the Davidson interception return to the Viking 23-yard line, the Bearcats turned to their workhorse, senior running back Aaron Rose. The senior tailback took three consecutive handoffs, the last being a 4-yard touchdown run, to cut the Viking lead to 21-14 at the half.

The third quarter saw more of the same field position battle. It also produced a worrisome moment for Bearcat Nation. Rose, the senior tailback, was gang tackled on a run, which saw him stay down on the field after the whistle, with what turned out to be a sprained ankle. The injury limited the offensive touches that the Bearcat running back received from that point, which in turn, limited the Bearcat running game. Rose run for 99 yards and a touchdown in the first half. Two plays after the injury, the Bearcats made their second big mistake of the night with another interception deep in their own territory. The Vikings capitalized a couple of plays later when running back Isaiah Smith scored from 12 yards out to give the Vikings a 28-14 lead.

From that point, the game saw more back and forth play, until late in the third quarter. This is when Davidson came down with his second interception that put Virginia High into prime position to cut into the Viking lead. The Bearcats were up to the challenge, as Lathrop found junior Michael Bradley for an 11-yard touchdown strike, to bring the Bearcats back within seven points at 28-21. The final drive of the third quarter saw the Bearcats defense take all of the momentum from the Vikings as they turned the ball over on downs. With all the momentum building across State Street, the Bearcats got the ball to begin the fourth quarter.

The Bearcats hopes were short lived. It was at the 9:30 mark of the 4th quarter when the pendulum swung back into northeast Tennessee. Tennessee High standout Ryan Gibson picked off his second pass of the game and returned it 60 yards for the touchdown. This turned out to be the play of the game. The Vikings would convert a fourth interception of the night into one final score to put the scrappy Bearcats away with a final score of 42-21.

Davidson led the Bearcat defense with two crucial interceptions that led to 14 Bearcat points. Rose had 7.5 tackles for VHS.

After the game, Bearcat head coach Michael Crist weighed both the positives and negatives after the loss to their interstate foes.

“There are a lot of positives to take away from Tennessee High.  I thought our effort and toughness was phenomenal.  However, we had some fundamental breakdowns defensively that we have to get fixed and improve on to continue to get better as a team,” Crist said. “Offensively, I felt we found a better rhythm this week, but have to eliminate the turnovers.  In our passing game, the interceptions were a combination of things and definitely can’t all be pinned on the quarterback.”

The rest of Region D had better not take the Bearcats lightly. Virginia High continues to progress each week, but still has plenty of room to grow. Tennesse High may be the most complete team the Bearcats will see all season. The Vikings surely woke up Saturday morning with some symptoms of Cat Scratch Fever.

The Bearcats will look to bounce back in Week 4, as they host the Warriors from Wise-Central on Homecoming night.

*Featured image above is credited to the great James Sword*

Don’t forget Bearcat fans, you can listen to live broadcasts AND replays of games already played from your favorite device on Spreaker.com/bearcatradio