A capacity crowd was on hand to watch Ridgeview vs. Central (photo by David Moore)

What promised to be yet another showdown between bitter arch rivals, turned into a no doubter before a half of play had concluded.  The Ridgeview Wolfpack had no problem with the Warriors from Wise County Central, trouncing them by a final tally of 54-0.

The win for the Wolfpack, along with the Union Bears triumph over Letcher County Central, sets up a battle for the ages atop Rose Ridge next Friday night.  The showdown will be a key determining factor for who will be the Mountain 7 District champion in 2018. The matchup could also go a long way on deciding who will have the top seed in the Region 2D postseason.

The Warriors from Wise received the opening kickoff and tried to establish control early.  A 50-yard bomb on the opening play from Isaiah McAmis to Ben Brickey stunned the Wolfpack faithful.  However, the long pass completion was nullified by a holding penalty.  The play would serve as the only notable amount of offense the Warriors could muster on the night.

After a Warrior punt, the Wolfpack went to work.  Trenton Adkins was the primary source of offense on the opening drive for the Pack with multiple carries.  The drive was capped off by a McKenzie Sproles one-yard touchdown plunge and the Pack were up 6-0 at the 5:08 mark of the first quarter.

It would not take long for the Pack to strike again.  On the ensuing kickoff, the Warriors coughed up the pigskin allowing the Wolfpack to pounce on it.  On the next play, Ridgeview quarterback Tyler O’Quin hit the friendly skies and found Sproles through the air for a 35-yard touchdown pass.  The Pack were up 13-0 in a flash.

Later in the first, after a Warrior three-and-out, it was Adkins’ time to reach pay dirt from one-yard out after another stellar drive.  Heading to the second quarter, the Pack were up 20-0.

The Warriors continued to struggle to find a foothold on the offensive side of the ball.  McAmis constantly slung passes to seemingly wide open receivers, only to be dismayed when they fell the turf.  The Wolfpack brought the lumber, so much that one would think the McClure Lumber Company was back in business.  Time after time, McAmis or running back C. J. Crabtree would take hard-nosed hits from the Pack defenders.

With 8:26 left on the clock in the first half, Adkins would get his second tally of the night, again from one-yard out.  The Pack were up 27-0.  On the ensuing kickoff, the Warriors yet again exercised ineptitude with the ball handling skills, giving the Pack another takeaway.  Two plays later, Matthew Sexton was in the end zone after a four-yard dash.  With 7:48 left in the half, it was all Pack at 34-0.

The Warriors would finally mount a drive, reaching the Wolfpack 25-yard line but could get no further, eventually turning the ball over on downs.  With 1:54 left in the half, O’Quin showed he can handle a two-minute drill as well.  Completing multiple passes on the drive, O’Quin finally found Adkins on a perfectly executed screen pass from 26 yards out with 37 ticks on the clock.  At the half, the Pack were up 40-0 and all the Warrior faithful could do was shake their heads in disbelief.

With the outcome decided by halftime, the Pack continued to work on their passing game in the second half.  O’Quin found Adkins again on a slant over the middle for an 18-yard scoring strike with 5:08 left in the third quarter.  The Pack closed out the scoring in the fourth with an exclamation mark by sophomore quarterback Nick Phillips on a 58-yard quarterback sweep.  The final tally from the Ridge was an emphatic 54-0 schlacking in favor of the Pack. 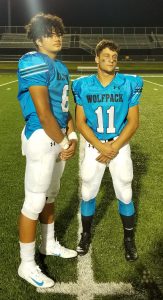 Stuffing the stat sheet on the night was Trenton Adkins.  The sophomore had 205 yards on the ground on 18 carries with two TDs.  Adkins also hauled in two scores through the air on two catches for 44 yards.  Matthew Sexton also continued his stellar breakout season with 63 yards on six carries and one TD.  Tyler O’Quin had an outstanding night behind center with 9-11 passing for 166 yards and three touchdowns.  The Warriors will head to Gene Malcolm Stadium in downtown Bristol on Friday in a search  for answers after a sub-par offensive performance tallying only 104 total yards.

After the final whistle was blown, Adkins had time to reflect on his huge evening against a district opponent and rival.  “Honestly, it felt great. I was beyond happy with my performance tonight, but I wouldn’t have been able to perform the way I did without my lineman,” Adkins said.  “They need a lot of glory for what they do.”

Adkins knows that the district matchup Union is one that all of southwest Virginia. It is a task that the sophomore tailback looks forward to.

“I think it’ll be a pretty good match up between both teams. I don’t know if there is a “better” team next week, but more like who plays their best game,” Adkins said.  “All I know is it’s gonna be a huge game for us, and a good one too.” 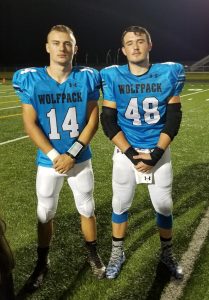 McKenzie (left) and Alijah (right) Sproles. Affectionately known as the “Legion of Boom”

Alijah Sproles, the leader of the Wolfpack defense, also looks forward to the  challenge that awaits the Pack.

“They (Union) better be ready!  We will be,” Sproles said. “We’re going to work extra hard in practice this week.  They’re a good team.”

All the talk amongst fans and parents surrounded next week’s showdown on the Ridge.  Currently, there is a football fever that is highly contagious in Dickenson County.  Next week’s contest will be the most anticipated football game in the county since Haysi vs. Galax in 2014.  The Mountain 7 showdown has all the ingredients for an instant classic.