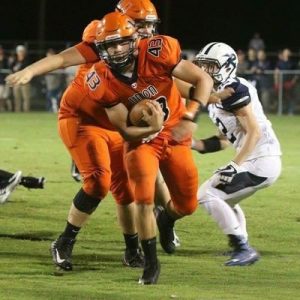 It was a pretty eventful week for Union inside linebacker and running back Mason Polier.

Defeating one of your biggest rivals on the road in a critical Region D contest? Check.

Rushing for over 100 yards, including a 70 yard touchdown romp? Check.

Racking up 11.5 tackles in a defensive effort that held the high flying Richlands offense to 28 points? Check.

Going viral when video of a monster hit made the rounds on national websites such as Yahoo Sports? Check.

The APC #3 ranked LB in the 2020 Class @mason_polier is a grown man! He does it all: runs well, blocks, an all-around team player, complete stud! pic.twitter.com/w4Dt5JtqHF

With his exceptional week, the Bears’ linebacker was voted CoalfieldSports Defensive Player of the Week. The junior transitioned to inside linebacker from his defensive end position last season, but he says the move has been going smoothly so far.

“[The transition] has been good, I’ve adapted to linebacker quickly,” Polier noted. “I like playing in the open field more, I feel like I can be more active on the defensive side of the ball at linebacker as opposed to defensive end. They will still slide me down to end some times on passing downs or long yardage situations.”

The Bears held the high flying Blue Tornado attack to 260 passing yards after Richlands put up 42 points in their opener against Gate City.

Polier noted the Bears made some adjustments to slow down the potent offense. “We blitzed a lot to throw off the QBs rhythm,” the junior linebacker said. “We did a good job of coverage in the secondary and had a great pass rush up front.”

The defensive terror snuck up on some teams last season. Now, every opposing coach is acutely aware of where Polier is on the field at all times. That has not slowed down the playmaker, currently rated as the #3 linebacker in Virginia by Appalachia Prep Combine.

All the attention of going viral was surreal for the junior stand out, but Polier is determined to make sure his focus was on the future, not the past. “Honestly I had no idea about it [his hit being featured on national websites] until I woke up Saturday morning, it surprised me,” said Polier. “It was really cool to see myself to goviral like that. I put it behind me and tried to forget about it and focus on getting ready for this week.”

Polier may be focused on this week’s opponent, but the fans in attendance will not soon forget his performance Friday.