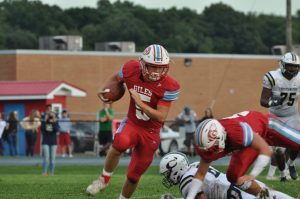 The first quarter was scoreless as neither team could move the ball on offense. Giles battled similar issues as they did against Blacksburg with turnovers and penalties.

Early in the second quarter, the Spartans were finally able to get the single-wing offense moving. After driving the ball to the 7-yard line, Chase Fleeman put it in the end zone on a reverse after breaking several tackles, putting Giles up 7-0.

The Blue Demons went three and out on their next drive which set up Giles for their next scoring drive. Ratcliffe carried the ball two times for minimal yardage. On a third and long, Coach Williams decided to put the ball in the air. Christiansburg anticipated the run, however, Ratcliffe dropped back and completed the pass to Preston Whitlock, who had his defender beat by five yards. Whitlock sprinted into the end zone for the 57-yard touchdown reception. Spartans went in at the half with a 14-0 lead. 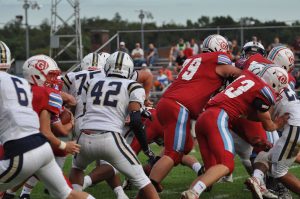 The third quarter was much like the first. Neither offense found the end zone. The Spartans were able to get close enough for Whitlock to make a 37-yard field goal. Giles held a 17-0 lead going into the fourth quarter.

Christiansburg finally got points on the board in the fourth quarter as quarterback MJ Hunter threw for two touchdowns. Caleb Henley was Hunter’s go to guy as he was on the receiving end of both touchdown strikes. The Spartans finished the quarter with two more scores on the ground from Ratcliffe and a safety.

Giles will host the Graham G-Men on Friday, where kickoff is slated for 7 p.m..