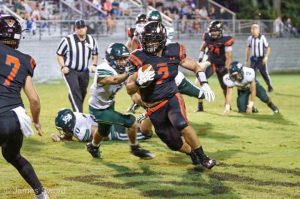 The Virginia High Bearcats received some preseason hype from fans and coaches around the region. For the second consecutive week, the Bearcats have shown flashes of greatness but have also shown to be sluggish. In a complete reversal of week one, Virginia High started off a little out of sorts before taking off in the second half to pull out a 20-13 week two victory against the John Battle Trojans.

The Bearcats were led by two-way standout, Aaron Rose, who had a carry for 0 yards in the first half. Rose exploded for six carries for 159 yards and two touchdowns in the second half. Senior Taurean Bizzell hauled in a touchdown pass from Bearcat quarterback Jamie Lathrop, to put Virginia High on the board in the second quarter.

The Virginia High defense was led by Jalon Dingus (10 tackles), Rose and Austin Davidson, who had a spectacular interception return at midfield, bobbing, weaving and spinning his way to the John Battle 8-yard line.

The Trojans (0-2, 0-1) had to deal with a couple of injuries to some key players. The reserves led a valiant attempt to pull the upset against the much more experienced Bearcats. Dylan Cunningham and Juddy Shaffer combined for 37 carries and 153 yards on the ground, while backup quarterback Micah Whitt threw for 43 yards. As a team, Battle rushed 50 times for 141 yards.

When asked of his thoughts on his team’s play against Battle, Bearcats’ head coach Michael Crist said;

“The John Battle rivalry never fails to be exciting for the fans.  I felt like both teams played with great effort and toughness.  Once we made some adjustments late in the first quarter, I thought our defense played fantastic.  Our offense never seemed to get into any type of rhythm.  I think some of that was the fact that we were pinned deep early and couldn’t flip the field until the second quarter.  We were also able to make some adjustments at the half in our run game, which proved to be big in the second half.  Give our offensive staff credit for getting those changes in place that allowed us to create some lanes for Aaron to break some runs, however, many of those he manufactured on his own will and strength.  We feel really good when we can put the ball in his hands late.”

The Bearcats (2-0, 1-0), while having some inconsistent play to start the season, the fact remains that they have won both games they have played.

The road for Virginia High gets much tougher in their next game. The Bearcats will travel across the state line to play in the 102nd edition of the V-T game, against their rival, the Tennessee High Vikings. The Trojans look to rebound, on the road, against a much improved 2-0 Holston Cavaliers team.

Don’t forget, Bearcat fans, if you can’t make it to the games on Friday night, you can listen to a live broadcast of every game on your favorite device at Spreaker.com/bearcatradio

*Featured image above courtesy of the great James Sword*