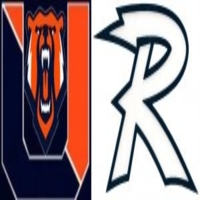 A score can be deceiving.

The scoreboard at Ernie Hicks Stadium read 42-28 when the dust settled. However, the game was far from a blowout.

The Tornado drove down the field looking to tie the game. However, Bryce Guerrant snagged an errant pass from Richlands quarterback Race Moir and returned it 18 yards for the game sealing touchdown.

While this game broke the tradition of the game being decided by six points or less, there was no shortage of excitement.

Richlands struck first when Race Moir connected with Taylor Horn on a seven-yard touchdown pass to take an early 7-0 lead on the Blues first possession. It didn’t take long for the Bears to answer when fullback Mason Polier scampered 61 yards for a score to knot it up at seven. A Justin Falin punt put the Blues on the one. Four downs later, a Levi Forrest punt was blocked in the end zone for an Avery Jenkins touchdowns. The score put the Bears in the control with a 14-7 lead.

The Blues wasted no time answering as Moir hit Altizer for an 18-yard TD pass to even the score at 14. Both teams found the end zone before the half. Union’s Jenkins on a 70-yard reception and Richlands’ Cole with a ten yard catch to send the game to the half tied at 21-21.

The second half allowed Bears to add some cushion for their comfort, pushing the lead to 35-21 on two touchdown runs by Jenkins..

The Blues would not go away. A 10-yard touchdown catch by Altizer from Moir brought the Blues within seven. That was as close as they would get before the clock struck zero. After a defensive stop, Richlands had one final opportunity to even the score, when Guerrant played the latest hero role in this rivalry.

The Bears were led by their dynamic running back duo of Avery Jenkins and Mason Polier. Polier finished the game with 125 rushing yards and one touchdown. Jenkins was a factor all over the field. He had 127 yards rushing and two scores while adding a 70-yard receiving touchdown to finish with 197 total yards and three offensive touchdowns. He added another touchdown on special teams, blocking a Richlands punt in the end zone and scooping it up for another score. The 70-yard pass to Jenkins was Union’s lone pass completion of the evening.

The Blues were led by outstanding signal caller Race Moir, who finished the game 20-31 for 260 yards and four touchdowns with two interceptions.  The Blues struggled to establish the run against the stout Union defense. The Tornado spun for 50 yards on 22 carries.

It might not have been quite as exciting as some of the past games in SWVA’s most entertaining rivalry, however, it lived up to its billing.