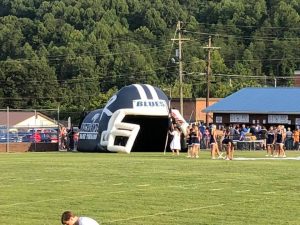 At times, it seemed as if only one team was out there.

Moir looked the part. There is a certain amount of pressure and hype that comes with being the quarterback at Richlands, and Moir passed the first test.

Richlands found a running game behind the legs of Brown, Logan Steele and several jet sweeps by the wideouts.

The Moir to Horn connection is as solid as a BBQ Bacon Cheeseburger from The Bearded Moose. That will be a threat all season.

However, not all was perfect for the Blues.

Moir missed on a few throws and the line struggled at times. However, that is expected with several starters sidelined on Friday night.

The defense held the inept Devils offense to -1 yard at the half, not allowing a single first down in the first half.

The ride ramps up this Friday night as the Blues welcome friendly rival Union into the friendly confines of Ernie Hicks Stadium.

Gate City hits the road to Abingdon.  It will be a homecoming for former Falcon head coach Darren Reed. It will be Reed’s first appearance since he resigned at Abingdon, where he was the head coach for the past four seasons, in July.