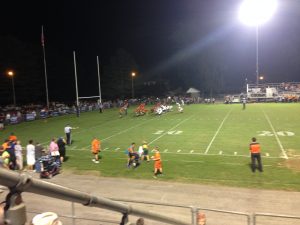 For perhaps the final matchup between two rivals, Union relied on big plays in the run game to earn an impressive but sloppy  35-20 victory over J.I. Burton.

Burton hung close at times behind senior quarterback Houston Thacker but the Raiders were outmanned at the line of scrimmage. Thacker was 20-of-28 for 192 yards. Most of Thacker’s yardage was racked up on short routes. The Raiders did complete one big pass, a 40+ yard gain to Derrick Allen. The strike to Allen helped Burton to cut the Union lead to 14-6. Allen had an outstanding night, catching 11 passes for 158 yards.

The third quarter proved to be the difference as Union exploded for 21 third quarter points. The Bears relied heavily on the run game and senior Avery Jenkins brought the highlights. Jenkins finished with 227 yards on only 11 touches with two touchdowns. The breakout was an 80-yard touchdown run that pushed the Bears’ lead to 28-6 with 6:21 remaining in the third.

Burton finished tough, adding two fourth quarter TDs to push the score to a respectable 35-20 margin. Bruising fullback Mikey Culbertson had two short touchdown runs but struggled to get yardage against a stiff Bears rush defense. Thacker to Allen was the successful formula for the Raiders, exposing some holes for the Bears pass defense. However, it was not enough to counter the way Union dominated the line of scrimmage.

The last touchdown of the game for Union was an encouraging sight, with senior QB Bailey Turner’s first passing touchdown since week two of the 2017 season. Turner got on the board on a 22-yard pitch and catch to Noah Garrison. The experienced leader was not asked to throw much, only completing a handful of passes. The senior looked healthy and could be the key to the Bears developing a much-needed diverse offense.

After the game, the Union staff was focused on the sloppy play. The Bears had double digit penalties on the night, and while neither team turned the ball over, both teams missed conversion attempts on fourth down.

If this truly was the last meeting between a school from Big Stone or Appalachia and a school from Norton, it’s a shame it was so forgettable. Burton has had classic contests with Appalachia and Powell Valley in the past. There is a lot of reminiscing that can be done on this rivalry.

Neither team will have long to work out any kinks. Next week, Union travels to Richlands to take on the Blue Tornado in what has became southwest Virginia’s most competitive rivalry. Burton is on the road at 1D preseason favorite Chilhowie.