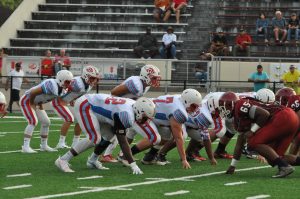 The Giles Spartans will travel across the county line to Bill Brown Stadium to face the Blacksburg Bruins to continue a series that started back in 1961. Despite last season’s 51-14 loss against the 2016 VHSL 3A State Champions, the Spartans know that this is a new season. Giles starts the 2018 season with new faces in the backfield and must prepare for an experienced Blacksburg team.

In last year’s contest, Ryan Beidleman rushed for more than 200 yards against the strong Bruins’ defense. Beidleman was the Timesland regular season leading scorer (212 points), runner-up in rushing (2,080 yards) and runner-up in interceptions (7). He also broke the school’s single-season rushing record by dashing for more than 2,700 yards.

This year, the Spartans look to continue their single-wing success without Beidleman carrying the mail. Sophomore Chaston Ratcliffe will retire his roles as fullback from last season and shift to tailback this season. It should not be much of a change for him. Ratcliffe was a tailback from little league all the way up to middle school. As a freshman, Ratcliffe was just shy of 500 yards rushing from the fullback spot. 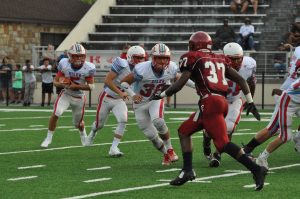 In front of Ratcliffe is a massive line led by junior tight end Kip Green (6-5, 280) who was the Timesland Sizzlin’ Sophomore of the year in 2017. Hunter Williams will take on the fullback roles in his debut season on the varsity squad. 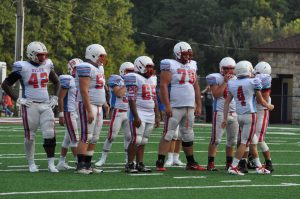 The Bruins also hope to continue their success without Cole Beck, a four-year starter who lead Blacksburg to a state championship in 2016 and the regional playoffs in 2017. Beck finished in the Timesland top 10 in scoring (132 pts) and rushing (1,375 yards). Beck now gets to don the maroon and orange of Virginia Tech where he will plays tailback for the Hokies.

With the loss of Beck, the Bruins expect to have a strong 2018 season with some key players returning for their senior season. UVa commit and senior, Tiquest Terry, (5’9 160) is one of those key players returning to the Blacksburg line-up. Terry is quick, elusive and despite his size, he is a challenge for teams to bring down when the ball is in his hands. In Giles’ 2016 victory over the Bruins, Terry managed to break eight tackles on an end around play for Blacksburg’s first score of the game. 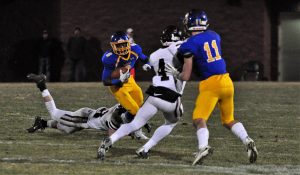 The Bruins also return three-year starter Grant Johnston (6’5 215) at the quarterback position. In 2017, Johnston passed for 1,621 yards and 24 TDs. Returning with him for their senior season are his key receivers Drew Babcock (6’1 175), Cole Epperley (6’1 188), and Thomas Coffey (6’0 180). Coffey suffered an injury in last year’s contest against the Spartans which sidelined him for most of the season.

While Blacksburg returns many starters, they will have to adjust to new head coach Eddie Sloss. The Blacksburg alum takes the job after Thad Wells left to become the head coach at Mooresville High in North Carolina. Sloss was an assistant for the Bruins before taking on a new role as head coach at Carroll County for four seasons. He leaves the Cavaliers with a record of 5-35.
Blacksburg leads the overall series 31-24.