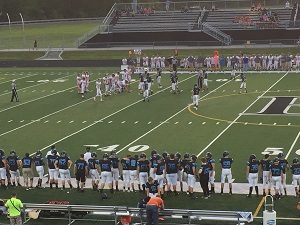 To say that the Ridgeview Wolfpack are looking forward to opening night would be an understatement.  After all, the opponent is the Grundy Golden Wave, who in three tries, haven’t been able to solve the puzzle that is Ridgeview.

Does that mean that the Golden Wave are just going to roll over and accept defeat in week one?  Not a chance.  The Golden Wave roll off of a 7-4 season and a Black Diamond District championship in 2017.  Coach Craig Plymal’s boys will be hungry for more after a disappointing end to the season.  The Wave were upset by J. I. Burton in the opening round of the Region 1D playoffs.

The key to the Golden Wave success in 2018 lies in the legs of speedy running back Gabe Fiser.  The senior tailback racked up over 1,500 yards on the ground a season ago and had over 2,000 all purpose yards.  Expect to see Fiser to be all over the field on Friday night. He is a threat in the backfield, on kick and punt returns and even out of the slot catching passes.  Fiser can do it all.  The senior accounted for both of Grundy’s scores a year ago on Rose Ridge.

Even though the Golden Wave look to primarily pound the rock with Fiser on the ground, the Wave should sprinkle in a pass or two from time to time.  Senior quarterback Derrick Endicott returns as the signal caller for the Wave amassing nearly 1,500 yards and 9 TD’s as Grundy’s quarterback.

On defense, the Golden Wave lost a key contributor in linebacker Jacob McNutt to graduation.  Not only was McNutt all Region 1D at linebacker, he was also all Region 1D at running back after eclipsing the 1,000-yard mark as a senior. 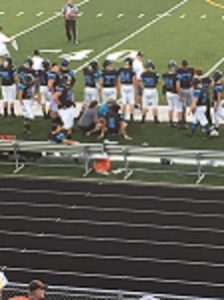 The big story out of Ridgeview is the health of running back Trenton Adkins.  Adkins was injured in the second quarter of last Friday night’s benefit game with Chilhowie.  The diagnosis–a bruised shin.  Adkins confirmed he will  be ready to suit up on Friday.  “(The shin)  Feels a lot better!  Just a little sore, but I’ll definitely be playing Friday!”, Adkins said.  Matthew Sexton will be ready to handle the workload to provide Adkins rest when needed.

In the three previous meetings between the Wolfpack and Golden Wave, the Wolfpack were able to throw the pigskin around at will with Noah Mullins.  With McKenzie Sproles now at the helm and taking the snaps, can the Wolfpack still have success through the air?  Look for Sproles to test out the arm and the Grundy secondary early and often.  Wideouts Gabe Counts and Jacob Hensley will be eager to find the goal line on the other end of Sproles’ passes.

The Wolfpack were given a stern test last Friday night against preseason Region 1D favorite, Chilhowie.  Even though the Pack escaped with a 30-20 victory over the Warriors, the boys from Smyth County held a 20-17 advantage in the waning moments of the game.  The Pack should be prepared for Friday night.

The Golden Wave are also coming off of a benefit game Friday night.  The Wave traveled to Ernie Hicks Stadium in Richlands and were trounced soundly by the Blue Tornado 34-0.  However, despite the lopsided defeat, the Golden Wave looked sound, according to folks who were in attendance.

The stage is set for opening night.  It’s the Pack vs. the Golden Wave.  Dickenson County vs. Buchanan County.  Who do you have?