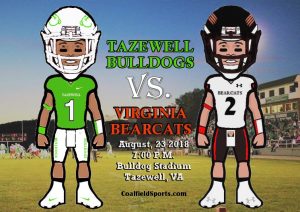 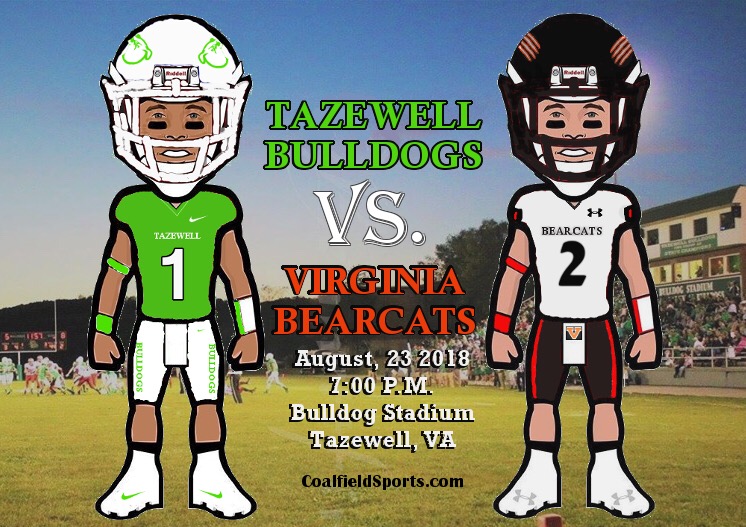 The Tazewell Bulldogs will host the Virginia High Bearcats on Thursday night at 7 p.m. at Bulldog Stadium, officially kicking off the high school football season in southwest Virginia.

In last year’s season opener, the Bulldog’s youthfulness was on full display. The Bearcats scored on their opening possession and never looked back, coming away with a 35-0 win.

Head Coach Michael Crist’s Virginia High team comes into the 2018 season after going 7-4 in 2017. The Bearcats lost their first round playoff game against Southwest District foe Marion. They have high hopes for a successful season after getting a taste of the playoffs last year. Among those returning is second year starting QB Jamie Lathrop and last year’s leading rusher and tackler RB/LB Aaron Rose.

Head Coach J’me Harris Bulldog team only lost three seniors last year but they remain one of the youngest teams in the area. They now have 37 young men on the roster after having sometimes as few as 22 dressed players available a year ago. Despite the low number and inexperience, the Dogs went 3-7 in 2017. The Dogs were victorious over Riverview (WV), Hurley, and Lebanon. This Tazewell squad is led by six seniors and a trio of sophomores; RB/DB Chancellor Harris, RB Jayden Taylor  and WR/DB Josiah Jordan.

Can this experienced Virginia High team take that next step and compete for the district championship and make a deep playoff run?

Will the youthful and athletic Tazewell Bulldogs make some noise in the SWD and surprise many of their doubters?

That’s what you have to love about high school football. Both teams will take the first step in answering those questions on Thursday night at a packed out Bulldog Stadium.

However, there is one thing for certain.

High school football is back in SWVA!

Leave a vote on how you think Thursday’s showdown ends up..