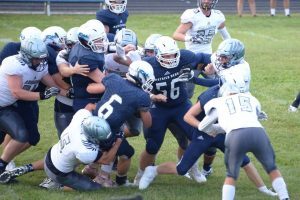 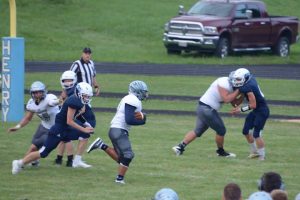 The annual benefit game between Abingdon and Patrick Henry was held August 16.  As usual, it was the dog days of summer in Glade Spring–hot and humid with a hint of football in the air.  Rebel quarterback Brady Stiltner struck first with a 53-yard touchdown pass to give Patrick Henry a 6-0 advantage in the first quarter.  Abingdon’s offense settled in and started executing. Abingdon’s senior quarterback Gabe Boothe (10-17, 166 YDS) put together a five play,  67-yard drive to help the Falcons answer.  However, William Seymore’s (5-38, 3 TD) five-yard dash into the end zone capped off the drive. After the made extra point, Abingdon took a 7-6 lead.

They never looked back.

Abingdon reeled off 27-second quarter points behind scores from River Carter, Martin Lucas and two more scores from Seymore to take a 34-6 lead at the half.  The Falcon defense started flexing its muscles to shut down the line of scrimmage led by TJ Taylor (2 Solo, 2 Assists, 1 TFL, and 1 sack).  The Falcons swarmed to force two turnovers. A Kenny Fields interception and Jake Crosswhite fumble recovery set up the Abingdon offense for two more scores. 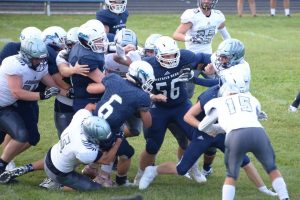 Although there were many new faces starting the second half for Abingdon, the results were the same.  The Falcons gobbled up any Rebel that tried to bust through the line. Much to the dismay of the Glade Spring faithful, there was nothing doing for Patrick Henry. Jadon Boothe stepped in to relieve his brother at quarterback. Like big brother, Jadon led the Falcons on two more scoring drives. Those drives were capped off by touchdowns plunges from John Fields and Peyton McClanahan.  Abingdon finished the night with 435 yards of total offense. The Falcon defense’s performance was remarkable, only allowing Patrick Henry 135 yards.

The Falcons kick off the regular season Friday as they travel to Bristol to take on the John Battle Trojans.