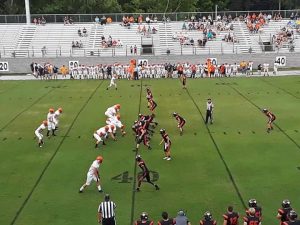 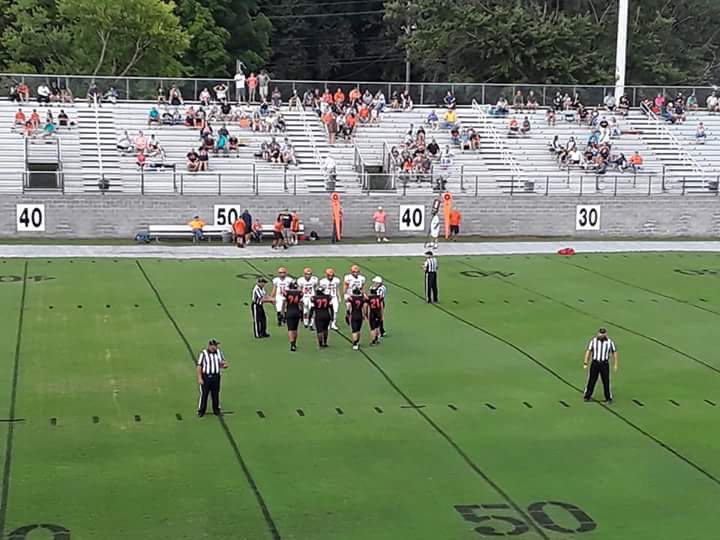 Captains meet at midfield for the pregame coin toss.

Leave it to the Union Bears to make a benefit game dramatic. The Bears traveled to Bristol to take on the Virginia High Bearcats for a scrimmage, their last preseason test before opening the season against John I. Burton on Aug. 23rd.

While the game does not count towards your record, it came down to a last second Union stop for the Bears to prevail, 24-20.

Coach Travis Turner used the scrimmage as valuable live game preparation for his team. However, Turner is still working out some kinks in the Bears rotation before the regular season gets under way.

Kickoffs were absent from the final preseason matchup, however, everything else was played out like a regular season contest.

The Bears began the scrimmage on offense on their own 35 and converted a short fourth down conversion to keep the opening drive alive. Union began from the T-formation and ended their first possession with a rushing touchdown from senior tailback Aaron Stidham.

Virginia High took over and showed flashes of their athletic capability with quarterback scrambles and edge runs. The Bearcats were still working out kinks as well as they had issues with the shotgun snaps early. However, the Bears took back over without allowing a Bearcat score.

Union promptly gave the ball right back to the Bearcats with a fumble on a mix up in the backfield. Virginia High didn’t waste the opportunity as quarterback, Jamie Lathrop, showed big play potential with a scoring dash of over 30 yards to even the score. Lathrop finished the scrimmage with a passing score to go with his rushing touchdown.

The spread formation played a vital role for the Bears for a majority of the game. The starting offensive line for Union was dominant and provided big holes for the Bears runners. Those runners made the most of their opportunities, often racking up yards after contact. The Bearcats, who struggled to get push against the first unit Bears, relied more on the playmaking ability of Lathrop and running backs Stevie Thomas and Aaron Rose.

The health of Union QB Bailey Turner was a question mark heading into the season, but the senior looked healthy and mobile. After a little rust early, Turner hit senior Justin Falin on a corner route to set up the second Bears touchdown, an inside run from the spread from Jenkins.

Falin also excelled in his kicking duties, as the senior connected on a 37-yard field goal to push the score to 17-7 at the half.

After the break, both teams began subbing generously. For the Bears, freshman quarterback Andy Jones saw the majority of the action. More prone to take off running, Jones showed his potential with a few crucial runs. Virginia High scored the first two touchdowns after the break with freshman running back Thomas, who showed off his athleticism to give the Bearcats a late 20-17 lead.

The Bear youngsters proved just as clutch as the more experienced players, scoring with 38 seconds on the clock to take a 24-20 lead. Virginia High came firing down the field and got into position, with Coach Crist electing to get his field goal unit a high pressure, game-like rep as time expired. The kick was short, and the game fell into a recent Bear cliche of late game finishes to win.

The Union staff was happy with the performance of the back up units in a late game situation but also felt there room for improvement before the season opener. Head coach Travis Turner was happy with the progression from week to week and the performance from his young kids in live late game action. He still played the game close to the vest and still hopes to see improvement in a few critical areas.

“I felt like the benefit game served it’s purpose in preparing us for the regular season. We got to take a look at a lot of guys under the lights and see how they performed,” said Crist. “Overall, I was pleased.  Union is a great program that’s run first class, so it’s always fun to compete with those guys.  I felt like we missed a few opportunities to get off the field defensively early, and made some mistakes offensively that hurt us in terms of overall score.  However, I felt like our guys competed really well. We came out of it fairly healthy, and found a few more guys that are ready to play, which we hope will address some of our lack of depth concerns.”

Both teams open the regular season on August 23rd, with Union hosting John I. Burton and Virginia High travelling to take on Tazewell.