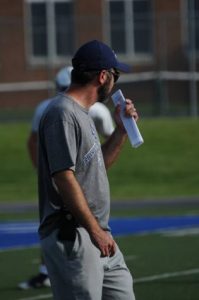 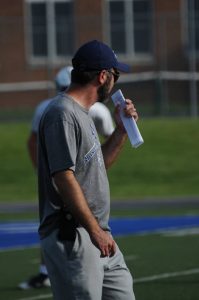 There’s a new sheriff in town.

His name is Garrett Amburgey.

With the sudden departure of head coach Darren Reed a week before practice began, the Abingdon Falcons found themselves in limbo and wondering which way the 2018 season would turn.  Luckily, a familiar face appeared.  Former Falcon offensive coordinator, Garrett Amburgey, returns to the friendly confines of Falcon Stadium to lead the 2018 Abingdon squad as their new head coach.

The return of Amburgey is a good sign for the Abingdon faithful. Amburgey returns to Abingdon after a one year stint as the offensive coordinator at Virginia High School.  He also brings back several previous coaches from an Abingdon staff that posted 28-7 record during his tenure as the Falcons’ offensive coordinator from 2014-2016. During that time frame, Amburgey led an offense that averaged 40+ points per game and averaged a play every 17 seconds.  He is also the coach that masterminded the play of two-time 3A all-state quarterback Jake Sturgill.

The former JJ Kelly quarterback, turned offensive coordinator and now head coach brings a wealth of knowledge and experience to to the Falcon program.  He is well-respected amongst his peers and players love the style of play he brings to the table.  Amburgey certainly looks to change the Falcons from the rushing attack we saw in 2017, to a more balanced attack in the spread.  Fortunately for Amburgey, he has a large senior class that is familiar with his scheme from his previous stint in Abingdon.  He also inherits a defense that only lost three players from 2017.  Time may be short but effort will not wain in the coming days as Amburgey and his staff prepare the Falcons’ opening game against John Battle.

The cupboard is far from bare and Amburgey has plenty to work with in 2018.