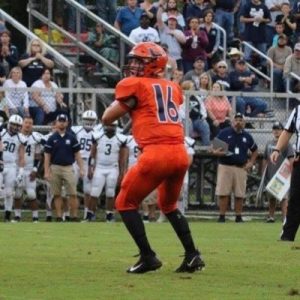 The 2017 season proved a rousing success for the Union High School football team. The Bears won 13 games, which included triumphs over rivals Richlands, Ridgeview and a Region D championship win over Graham. However, for one Bear, 2017 was bittersweet.

Quarterback Bailey Turner, entering into his third year as a starter and in 2017, was expected to be the driving force for the Union offense. However, his season ended in heartbreak, when he went down with an injury in the fourth quarter of the second game. The starting quarterback became the team’s most vocal cheerleader. As the season progressed, the wins piled up, leaving Turner to ponder on what the season outcome could have been had he remained healthy.

After nine grueling months of physical therapy, Turner is focused on 2018. The quarterback’s focus is fully on helping this year’s team be successful. The surgically repaired knee has healed. In fact, the knee has healed so well that his physical therapist says his surgically repaired knee is stronger than his uninjured knee. Mobility does not appear to be an issue as Turner has not been slow to move around the pocket throughout the summer. The 2018 Bears will no longer be forced to be a run first offense. A healthy Turner allows Union to be able to attack teams through the air and punish defenses for stacking the box at the line of scrimmage.

The Bears will continue to work out of the T-formation as a base offense. However, Bailey assures that there are some other kinks in the Bears’ offense to keep defenses on their toes. Turner is motivated to prove he’s earned the right to start game one and never look back.

It’s one issue, as a signal caller, to have to answer to your head coach after making a mistake. For Turner, that is amplified, seeing that his father, Travis Turner, is his head coach. Bailey is quick to note that he gets no extra praise, he’s simply another cog in the machine.

“He’s pretty tough on all of us,” the senior quarterback noted. “Our team as a whole will be ready when the going gets tough. He brings out the best in everyone, including myself.”

Most people view Bailey Turner as a gridiron hero. However, Turner is much more than just a football player. In the classroom, he is a straight-A student. He also mans the hardwood for the Bears’ basketball team.

After graduation, Turner plans on attending a four-year university.

Who knows? Perhaps, the next head coach for the Union Bears will also be a Turner.

2018 presents new challenges for the team and Turner specifically.

The good news for Turner is he is fully equipped to handle any adversity and succeed.