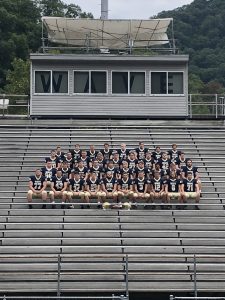 After two consecutive 7-4 seasons that resulted in an exit in the first round of the playoffs, the Grundy Golden Wave look to improve upon their previous record and win their first playoff game since 2010.

This year, the defending Black Diamond District champions are primed and ready for these goals to become a reality. When third year head coach Craig Plymal looks at the goals for the 2018 Golden Wave, he has no doubts.

“We wanna get that big playoff win and beat 7-4,” Plymal said. “It was a goal last year (and is again this year).”

Grundy lost RB/LB Jacob McNutt, a four-year starter at both positions, to graduation. McNutt had been the bread and butter of a Golden Wave offense over the past four seasons. The anchor of the Grundy line, Jacob McCoy, also departed as a high school graduate. With these departures, especially replacing a player that meant as much as McNutt over the past four years, some teams would have trouble replacing them. However, the transition couldn’t have come at a better time for the Golden Wave.

Grundy returns RB Gabe Fiser, who like McNutt, rushed for over 1,000 yards in 2017. The Golden Wave will flow through the senior tailback, who can do a little bit of everything.

“You gotta realize the numbers he’s put up the last two years—all-purpose yards and as a 1,000 yard rusher himself last year,” Plymal said. “I don’t think there’s anything that Gabe can’t do.”

Fiser’s numbers hold that statement to be true. The senior tailback was the Black Diamond District’s Offensive Player of the Year behind 172 carries, 1,562 yards and 25 touchdowns, which was also good enough for All-Region 1D honors. In addition to his offensive numbers, Fiser proved to be electric as a return man. Last year, his all-purpose yards racked up to be 2,090 with a punt return going for a touchdown.

Don’t be surprised if the Wave gets Fiser some touches through the air either.

“He’s going to be a solid receiver. If we can get some matchups we like, we may be able to isolate him here or there,” said Plymal, the 2017 BDD Coach of the Year. “I think he can handle the load. I think we have some kids who are gonna surround him with help.”

That help is pretty experienced.  The Wave return eight starters from last year’s offense to the field at Nelson Memorial this fall. The returnees include third year starter and 2017 BDD Lineman of the Year Tristan Justus, first team All-BDD receiver Jake McCoy and receiver Casey Lawson.

Senior quarterback Derrick Endicott returns for his third season as the signal caller for Grundy. The senior captain has accumulated 1,481 yards and nine touchdowns as the starting quarterback at Grundy High. Endicott’s arm should be well rested for his senior campaign after sharing the backfield with two 1,000-yard rushers in 2017.

The Golden Wave defense will have to fill McNutt’s void in the linebacker core. However, according to Plymal, that unit will look remain familiar.

“Our defense is gonna be pretty well in tact. Our secondary should be where it was last year. Our outside linebackers are gonna be the same,” said the Concord University alum. “Our interior line is gonna be good. We got Cullen Nash-Cleek back with us at defensive end and Tristan Justus. We’ve got some kids that can play some defense.”

Plymal also returns the key portions of Grundy’s special teams play. In addition to Fiser at returner, Sage Keen returns to handle the Wave’s kicking duty. In 2017, Keen was 36 of 43 on extra points, which was good enough to be selected first team All-BDD as a kicker. Junior Jacob McCoy returns to handle the punting duties a season after he also was named first team All-BDD punter.

The Wave is ready to ride in 2018, but things are not going to be easy out the gate as they welcome Trenton Atkins and the Ridgeview Wolfpack to Buchanan County for battle.

Not only does Plymal and the gang realize the significance of it being game number one, but they realize its importance around week 12.

“This first game is a big game,” said Plymal. “Just because we are going to get some AA points out of it, win or lose.”

With Ridgeview being one of the four losses Grundy sustained in 2017, a win to begin the season would be a step towards improving from 7-4.