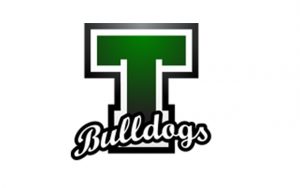 Working hard and getting better everyday is a motto that the young Bulldogs are trying to live by. In 2017, they fielded on average five to six freshmen starting on both offense and defense and only lost three seniors to graduation. Coach Harris and his staff are hoping that the experience from last year brings more success to this young football team in 2018.

What do these young Dogs have to do to take that next step in 2018?

“The foundation is there because we’ve been doing the same things for two years now. They know the terminology and they understand the concepts,” said Coach Harris. “The numbers have improved ,so we are starting to build depth. Now we have to get this years freshman class to understand it’s varsity football and how different it is and the speed and ability that they have to play against.”

The numbers have improved, having 36 young men itching to suit up in the green and white on Friday nights this fall. Still a team dominated by underclassmen, it will be interesting to see how much these Dogs have grown from a year ago. One thing is for certain, Bulldog Stadium will be rocking on Thursday night August 23rd when the Virginia High Bearcats roll into town.

The Bulldogs travel to Central High School (Wise) on Friday, August 10th for a scrimmage. They end their pre-season with a benefit game at Bulldog Stadium against East Montgomery on August 17th.

Sophomore Jamir Blevins returns at quarterback after a promising freshmen year where he threw for 1078 yards and 11 touchdowns. Sophomore Chancellor Harris, will join him at running back. Harris was the Dog’s leading rusher in 2017, rushing for 794 yards and 9 TDs. Jayden Taylor, another sophomore, will fill the fullback role for the Dogs after primarily playing defense a season ago. Also seeing time in the backfield will be freshman Mike Jones, sophomore Cameron Taylor and senior Thaddeus Mitchell.

Mason Mullins, the Dog’s electric receiver from a season ago, is now at Bluefield College. The team will rely on battle tested sophomore Josiah Jordan, to head a young but athletic receiving corps. Jordan had 486 yards receiving and hauled in six touchdowns as a freshman. Senior Trae Thompson, sophomore Gavin Nunley, junior Lucas Honaker and sophomore Josiah Honaker will round out a deep wide receiver group.

The majority of the offensive line returns for the Dogs. That group will be anchored by senior Tristan Brewster and sophomore Josh Herndon. Senior brothers Marcus and Barry Sluss also return and freshmen Octavius Pridgen, Josh Witt and Hagen Cochran will be down in the trenches on Friday nights.

Senior Trae Thompson will do his best to lead a defensive line after losing Derrick Young, who is now at Bluefield College. Joining him will be Brewster, Herndon, Cochran, Josiah Honaker and newcomer Cameron Saunders.

Hunter O’Quinn has departed and is attending the University of Virginia after leading the Dogs in tackles in 2017. The linebackers will be led by junior Cameron Taylor and Pridgen. Also seeing time for the Dogs at linebacker will be Witt and Mitchell.

The secondary is deep for the young Bulldogs. Harris, Taylor and Jordan will anchor the unit. All three started for the Dogs a season ago, with Harris being second on the team in tackles. Honaker, Nunley, Jones and sophomore Tanner Wimmer will all compete and play in the secondary as well.